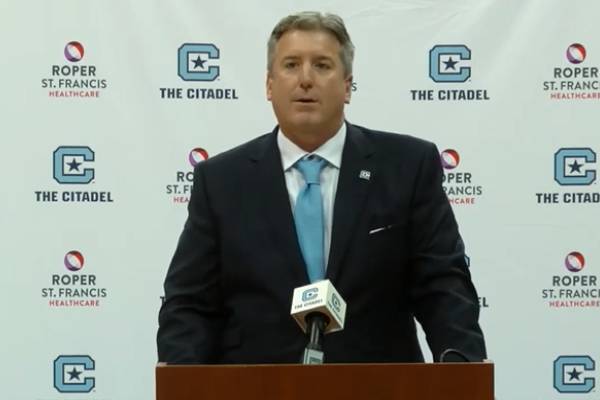 In addition, Ed is the 2009 SoCon Coach of the year and 2009 Skip Prosser Man of the Year. So much has been said about Ed’s career. Now let’s look into his personal life, which has been blossoming since he’s been enjoying fatherhood for quite some time. If you didn’t know, Ed is a doting father of three adorable kids with his wife, Ginny Conroy.

Therefore, let’s find out more about Ed Conroy’s children and their whereabouts.

His Eldest Son Is An Assistant Coach

Riley Conroy was born on 25 February 1996 in New Orleans as the eldest son of Ed and Ginny Conroy. Apart from him, his parents have welcomed two more children, Hunt Conroy and Hannah Conroy.

Ed Conroy’s son, Riley, is currently working as an assistant coach at Southeastern Louisiana University. Additionally, he previously worked as the Director of Operations and Recruiting and Interim Assistant Coach at the college.

Riley graduated from the Jesuit High School in the early 2010s and was an active basketball player. In addition, he earned three letters for coach Chris Jennings at the school and received the second-team all-district honors as a sophomore. Also, he was an honorable mention all-district as a senior.

After graduation, the Jesuit alumnus enrolled at Tulane University in 2014 and graduated with a bachelor’s degree in 2018. He majored in business administration and management general. Moreover, during his college days, he was highly involved with the Tulane Men’s Basketball Team as a point guard.

Furthermore, after getting his degree, Riley Conroy worked as an assistant coach at Sunrise Christian Academy in 2018 and still serves there. The head coach’s son seems to be focused on advancing his career and is probably single.

It seems all of Ed Conroy’s children have inherited his passion and love for basketball. His eldest has already become an assistant coach at the collegiate level, while his second son, Hunt Conroy, is also venturing on the same path.

Like his father, Hunt also attended Vanderbilt University. Moreover, he has been appointed as a graduate assistant for the men’s basketball program of the university.

Also Read: How Michael Malone’s Daughters Have Grown Up

Being the youngest kid in the family is good. On top of that, being the only daughter is a blessing. One such lucky kid is the Citadel Bulldogs’ head coach’s little girl Hannah Conroy. As the youngest one, she must have been pampered and loved by all the family members and must have had the happiest childhood.

Ginny and Ed Conroy’s daughter, Hannah Conroy, has already completed her school-level education and is currently a university student. She is a student at Clemson University. Moreover, Hannah must be focusing on her studies and doing well in her classes. So, hopefully, we will get to hear more about her in the coming days.

Nevertheless, Ed Conroy’s children have grown up and are doing great in their professions. We wish all of them a rocking career ahead.

The name Hannah comes from the Hebrew name Channah which means Favor or Grace.