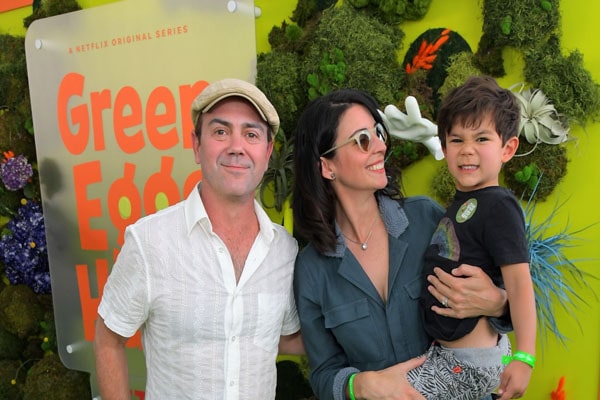 The couple who are always on the rolling of a camera, who have made an image of hardworking actors, Joe Lo Truglio, and Beth Dover, got married on April 19, 2014. They have been blessed with a son named Eli James Lo Truglio. Joe Lo Truglio’s son Eli James was born on March 8, 2016.

Let’s discover more about the cute three-year-old son of Joe and Beth.

Eli James Lo Truglio’s papa, Joe Truglio, is an American actor, best known for his role as Charles Boyle in Brooklyn Nine-Nine. Papa Joe is a very talented actor, bagging other characters in his resume as a comedian, writer, and producer. He was 46-years-old when his son Eli was born.

Joe spends a lovely time with his son, Eli. He is always there, making his son laugh and making his day great. What a lovely father, Joe, is! And Mama Beth is present there behind the camera to get some cute snaps.

Joe Lo Truglio’s son Eli James Lo Truglio is growing up to be quite a good looking lad. And Father Joe looks more and more loving towards his son. Alongside working behind the camera most of the time, Joe is also out there making his son feel more special.

Eli James’ mother Beth Dover is an actress known for the role of Linda Ferguson on the series OITNB. The beautiful Beth married Joe on April 19, 2014, and gave birth to Eli after two years of her marriage. Eli James Lo Truglio, mother Beth’s prince, is three years old as of now.

Baby Eli and Mother Beth share the same smile, don’t they? Well, we can see that Eli James is very close to his gorgeous mom Beth. Plus he also loves spending time with his grandmother, Diane Brown, Beth’s mother.

We hope that Eli keeps on spending time with his grandparents, even after being big. Little Eli is the absolute prince of his mother and grandma.

Has A Big  Family

Eli James Lo Truglio is a part of a huge family. Everyone from his father and mother’s side is very close to each other, forming a big lovely family. Cute Eli is always celebrating festivals and spending time with his family members. Uncle Brian, his father’s brother, and Granny share many cute videos and pictures of him on their Instagrams.

We can see that the cute Eli James has everyone in his small palm. Everyone loves him and wishes only the best for him. Joe Lo Truglio’s son Eli is growing up in great love and care.