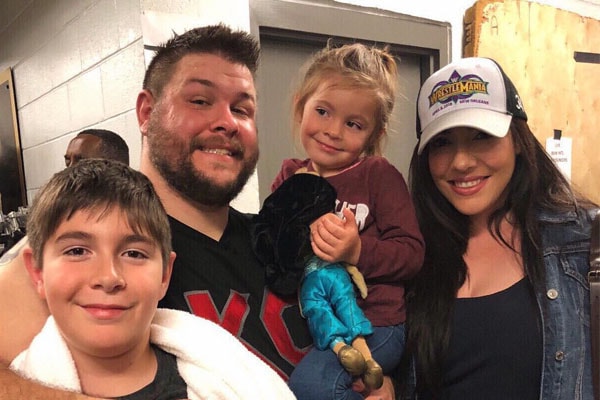 WWE Wrestler Kevin Owens’ children, Elodie Leila and Owen were born in the year April 2014 and December 2007 respectively. The lovely siblings have a loving bond with one another and are inseparable.

The relationship between professional wrestler, Kevin Steen and his stunning wife, Karina Leila dates back to the days when they were teens. However, the lovebirds finally decided to walk down the aisle together in the year 2007 in an auspicious ceremony.

The Owen is the elder brother of the beautiful 4-year-old sister, Elodie Leila. The wonderful son of Kevin Owen and Karina loves traveling to new places with his father and family. Furthermore, Owen has an interest in Karate and is in the Black Belt Club.

Owen is a wonderful brother to his little sister, Elodie Leila and feels obliged to share responsibility with his small sister. The lovely siblings enjoy each other’s company and spend most of their times together. Owen is a caring and devoted big brother to little Elodie.

The adorable and fashionable Elodie Leila is the younger sibling of big brother, Owen. The photogenic Elodie loves taking pictures with her mother and is a little bundle of joy. The stunning mother of two, Karina Leila Steen, has made a proper guinea pig of her children to experiment with her children’s fashion. However, the ever-photo-ready and beautiful Elodie flaunts her skills and has been successful in making the media and followers gasp in awe.

The stunning mother Karina Leila Steen shares an intimate and strong bond with her daughter and does not hesitate to flaunt her precious baby girl on social media. Likewise, mother Karina’s sense of style while dressing up her children is often appreciated and admired in her Instagram account.

The beautiful name Owen was named after late Owen Hart whom Kevin Owens is a big fan of. Kevin has dedicated his WWE ring name to both Hart and his son. The traditional Welsh name means ‘young warrior’, ‘noble’, or ‘wellborn’.