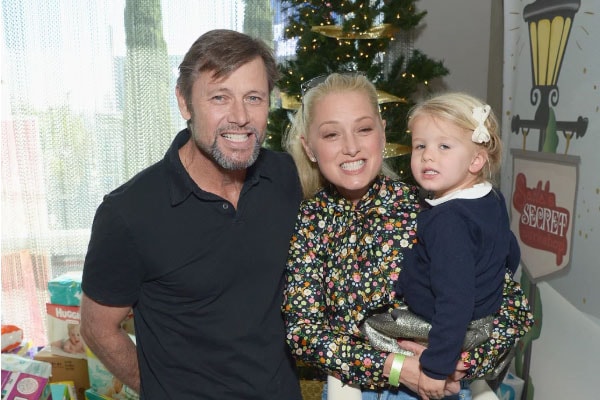 The Dynasty TV actor Grant Show‘s daughter Eloise McCue Show was born on the 21st of March 2014. During the time of the birth, the little Eloise weighed 6 pounds 3 ounces. Eloise McCue is the only child of Grant Show whom he had with his wife, Katherine LaNasa. As it was the couple’s first child, both Grant and Katherine were pretty excited to welcome their little one in their family.

Not to reveal the face of their child in their social media handles is a common strategy obtained by celebrities to keep their younglings away from the media spotlight. And Grant and Katherine are doing the same for their daughter Eloise. Well, Grant hasn’t uploaded a single photo of his daughter, but whenever Katherine uploads a picture, she makes sure to keep the face of Eloise hidden.

It seems like Eloise McCue Show’s parents are too much concerned about her safety. Despite not revealing the face of their daughter, they attend some events together. In which we can see that small Eloise McCue has got similar blonde hair like her mother, Katherine and looks like a mini-me version of Katherine.

Eloise’s father Grant Show is an American actor. And as for her mother Katherine LaNasa, she is also an American actress. Before tieing knots with one another, both Grant and Katherine have been married before. Grant was married to Pollyanna Mcintosh from 2004 to 2011. And LaNasa was married to Dennis Hopper from 1989 to1992 and French Stewart from 1998 to 2009.

The name Eloise has got a long history. It is the English form of French name Éloïse which is said to have come from old French name Heloise. And Heloise comes from Helewidis, a Germanic name composed of the words heil “healthy” and wid “wide.”

As for the name McCue, it is the anglicised form of name MacAodh, an Old Gaelic name. Mac means “son of” and Aodh means “fire”, which is also the name of a pagan god.

Ecelebritymirror for more News on CelebrityBabies and Entertainment.