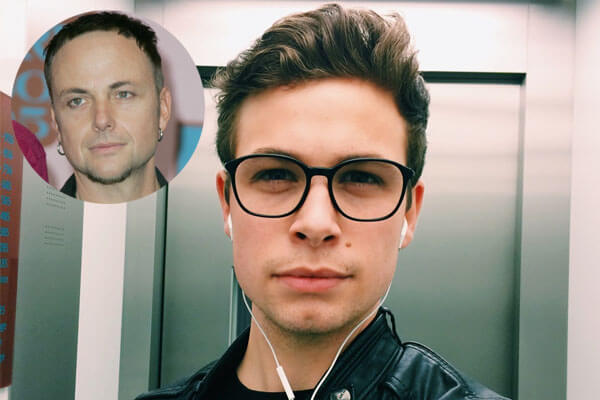 Emil Reinke was born on June 20, 1990. He is Rammstein guitarist Paul Landers‘ son with his ex-wife, Nikki Landers. Emil’s parents tied the knot in 1984 and divorced soon after in 1987. He is the former couple’s only child together. Emil’s father Paul has one more daughter, Lilly, through his girlfriend, Arielle. As such, Lilly is Emil’s half-sister.

When it comes to Emil Reinke’s relationship status, he is possibly single and not dating anyone at the moment. The young and handsome Emil is an actor, director, and independent musician based in Berlin, Germany. Along with his music partner, Pierro Pappacio, Emil is the co-founder of the Berlin-based indie electro-pop group, Twocolors.

Emil Reinke is famous for starring in the TV series Turkish for Beginners (2006), in which he played as Nils Schneider. Early in his career, Emil showed his brilliant acting performances in the short film, The Gift (1997), playing as Jan Ö. Further, Emil had a small role in the music video of the band “The 3rd Generation.” As an actor, Emil certainly shows a lot of talent and hard work, which is reflected in his onscreen performances.

The legendary guitarist Paul Landers encourages his son to do more TV and movie roles. Undoubtedly, the promising Emil has a lot to show in his acting profession. In his next movie Max Minsky and Me, Emil played the lead role. Besides being an actor, Emil also made his directorial debut with the short film Human Garden (2011).

Moving on, Emil is also making music like his father Paul. He has a Spotify account, which he links to on his Twitter bio. Along with his friend Pierro, Emil produces music for his electro and melodic pop group, Twocolors, which has its own website.

Up till now, Emil has released a dozen songs through Twocolors, most notably Follow You, Mantra and Two Places. Like his acting skills, Emil’s musical talent is also well-received by his fans in Germany.

Emil comes from the Latin “Aemilius,” which is an old Roman name that means “rival, trying to equal or excel.”