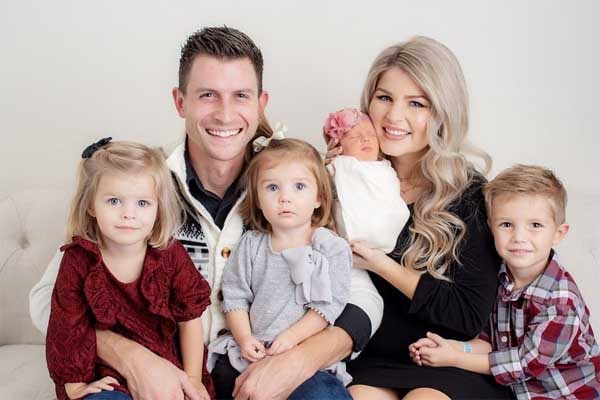 The Bringing Up Bates stars Erin Bates and Chad Paine tied their knot back on November 2, 2013. Together the couple is proud parents of four lovely children, three daughters, and a son.

Both of them come from a family with a whole lot of kids, so; they often face similar questions like how many kids do you prefer or how many have you planned. Well, they have a simple answer to that question; it doesn’t matter how many kids they have, what matters is that they remain together. That said, to date, the lovely parents have four kids, Brooklyn Elise Paine, Carson Paine, Everly Hope Paine, and Holland Grace Paine. So, let’s get to know more about Erin Bates’ children.

Erin Bates Paine and her better-half Chad Paine welcomed their son Charles Stephen “Carson” Paine IV on May 15, 2015. The pair first announced the arrival of the little boy on March 6, 2015. Carson was born after his mother Erin suffered several miscarriages, making the pregnancy high-risk. The news of his first child-son made dad Chad excited, which he didn’t shy away from expressing. He wrote in his blogs, now that he knew it’s going to be a little man, he can’t help but try and imagine what his son would look like. Plus, the excitement of being a dad could be clearly seen in his writing as he wrote, what will it feel like being a dad, having the responsibility of the family.

Well, Chad has been a wonderful and loving father who has taken care of his wife and kids. He shares a powerful bond with his son Carson. Both of them can be seen spending much of their free time doing cool stuff, having fun, and chilling. Erin Bates’ son Carson Paine has already made his Tv debut on August 6, 2015. Even before he was born, he was the center of attention of several episodes of the first and second seasons of the UpTV show Bringing Up Bates. Chad and Erin’s baby announcement, checkups, and baby shower were all featured in the show, whereas his birth was the main feature of the episode, Erin’s Little Miracle.

Erin Bates’ daughter Brooklyn Elise Paine was born at 5:42 am on August 6, 2016. At the time of her birth, she weighed 6 pounds and 6 ounces. The pair announced they were expecting their second child on February 14, 2016. They also said that the pregnancy was going more smoothly than Erin’s pregnancy with Carson had been. Brooklyn Elise Paine’s first name was suggested by her mother Erin, while her father, Chad, gave her middle name.

Like her elder brother Carson, Brooklyn also made an appearance in the fourth season of the UpTV show Bringing Up Bates. Her birth was the main subject of the episode, “And Baby Makes Five?” which aired on October 27, 2016.

Erin and Chad seemed thrilled when they announced they would be adding another daughter to their family on October 17, 2017. People covered their announcement, and there they mentioned their daughter is to be named Everly Hope. They also said their unborn daughter was loved and adored by all at the time being. A short but funny thing the couple added to their statement was, their hands were filled with two little ones-the giggles, slobbery kisses, and yes, the diapers! But they were definitely anticipating Everly’s arrival.

Erin Bates’ daughter Everly Hope Paine was born at 4:12 am on March 30, 2018. At the time of her birth, she weighed 5 pounds, 4 ounces, and was 18 inches long. Like her elder siblings, she was also the subject of many episodes in season 7 of the Bringing Up Bates. But her official debut was on the episode Labor Paines, which aired on August 8, 2018.

Chad and Erin welcomed their youngest daughter Holland Grace Paine on November 26, 2019, and at the time of birth, she weighed 5 pounds and 5 ounces. The pair announced the arrival of their fourth child on June 6, 2019, but they didn’t reveal the sex of the youngest addition. In an interview, they said, having a child changes your life, but deep down they knew their eldest son needed a sibling and when they met their second daughter they thought she needed a younger sibling too. Same goes for Everly; she also needed a younger sibling with whom she can play with.

Speaking of the Paine Family’s children, they are all fond of each other. They love spending time with one another and their parents. The family of six can be seen cooking, playing at the back yard, or the lawn. Sometimes, they can be seen hanging out at the beach, near the park, enjoying one another’s company. Having a lot of kids is not an easy task, but that’s not the case with Chad and Erin. They belong to a family where they have tons of siblings, so having a bunch of kids in their house must not be a new thing to them.

But the most important thing you learn when you come from a large family is, your parents don’t have a lot of time for you so you must have your siblings back and they must have yours. That’s what Erin and her husband Chad are teaching their kids always to have one another’s back no matter what.

Everly Hope Paine: The name Everly is of Old English origin, meaning From The Boar Meadow.