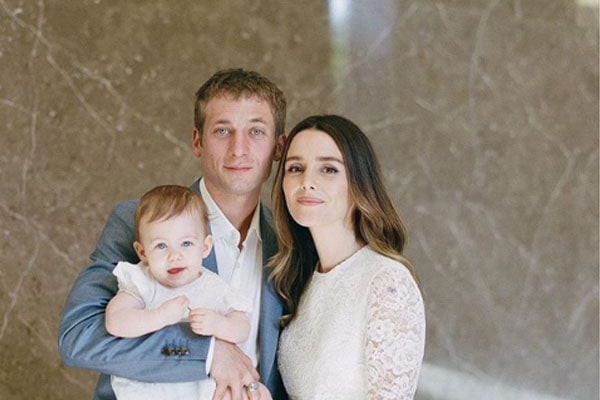 Addison Timlin is a name that most of us have heard; she is a rising star in Hollywood. She is currently in a relationship with her long-time boyfriend, Jeremy Allen White. Jeremy is also an actor, the duo first met on the 2008 film Afterschool. After a while, the lovely pair started dating, and now they share a beautiful daughter named Ezer Billie White.

Addison Timlin’s daughter Ezer Billie White was born on October 20, 2018. Both parents share a close bond with their daughter. Ezer has her mother’s nickname as her middle name. Her parents exchanged their vows on October 18, 2019, nearly a year after her birth. She is as cute as baby Yoda and as gentle as an angel. So today, let’s get to know more about the gorgeous actress Addison’s baby girl Ezer.

Addison’s Daughter Is An Angel

Addison Timlin’s daughter Ezer Billie White is really cute and adorable. We were fortunate that Ezer’s first-ever picture was shared by her mother on her Instagram. So, now that moment of joy and happiness has last forever in our memories and theirs. The picture uploaded by Addison showed her husband holding his beloved daughter for the first time while another photo showed Addison hugging her daughter.

Furthermore, Addison first announced her pregnancy on her 27th birthday. She broke the news of her becoming a mother with a sweet post that she shared with her fans on her social media account. She mentioned that the lovely pair are expecting a child, and her heart is bursting at the seams. It was her birthday, but her wish had already come true. Addison Timlin’s husband Jeremy, also shared a picture writing Addison’s going to be the best momma, and he loves her. Clearly, we can see the chemistry going on between the two. Well, the lovely duo seems to be really happy as they tend to cherish every moment with their little angel.

It wasn’t easy, but we did it. We left the house. pic.twitter.com/5fskW3NB5o

Addison and her husband, Jeremy, love to spend time with their little daughter.  Their daughter Ezer seems to enjoy having her grandpa around. Little Ezer is so cute and adorable that no one seems to let her go, everyone’s so attached to her that they just want to hold her or give her a big hug. She also seems to like it as she tends to sleep on their lap.

Addison and her husband, Jeremy got married at the Beverly Hills courthouse in Los Angeles. In an article written by People they mentioned, Dakota Johnson and Chris Martin were present at the courthouse. Speaking of the couple, they were wearing matching black denim jackets custom-embroidered with hearts and the words Til Death. Buddy + Billie was also embedded on their jackets, which seems to be their nickname for one another.

Furthermore, the couple had been engaged for over a year. Her engagement with her long-time boyfriend was never made official; it was apparent that the couple were engaged after Addison was spotted wearing a diamond ring. As they say, love doesn’t need words; all it needs is emotion and care, which was obvious in their case. Ezer Billie White’s parents have been together for more than three years now and are enjoying blissful family life.