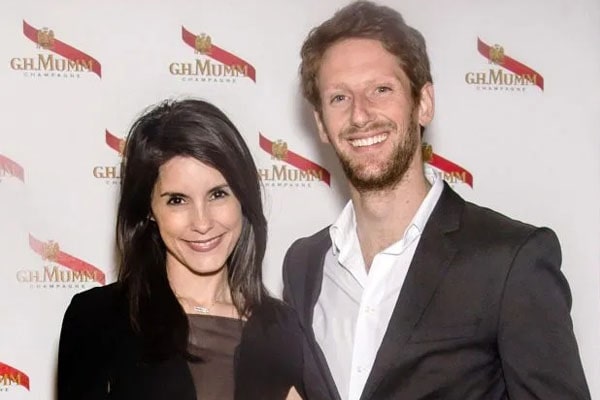 Romain Grosjean together with his wife Marion Jolles is a proud parents of three children. Image Source: Getty Images.

Grosjean had all of his three kids together with his loving partner Marion Jolles. Romain Grosjean’s wife Jolles is a French journalist and broadcaster best known for her TV career on the popular car show, Automoto. The amazing couple has been together since 2008 and got married in 2012.

Sacha Seems To Be A Born Racer

Romain Grosjean’s son Sacha Grosjean was born in the year 2013. Sacha is the eldest child of the phenomenal F1 racer Romain, among his two siblings. He was born a year later of his parents’ marriage.

Not only that but, his father was extremely proud when his 5-year-old son at the time drew the sketch with a bunch of doodle people roaming around which Romain relates to an F1 car.

Who knows what might future behold, Sacha might even follow on his father’s footsteps and make his father even more proud in the coming days. As for now, he is enjoying his early school life.

Simon Grosjean Is The Middle Child Of The Racer

The only thing that reminds by the two little cute sons is their father’s rich racing career. Romain Grosjean who holds dual French-Swiss nationality is a racing driver, currently racing under the French flag in Formula One for the Haas F1 Team. The adorable family of five is surely an example to many of Grosjean’s fans around the globe.

Camille Is The Only Daughter

It seems as if “2” is the lucky number of the Grosjean family, as all three kids of Romain were born two years apart from each other. Romain Grosjean’s child Camille Grosjean was born in December of 2017.

Despite their fame and respect, Romain together with his wife has been successful in keeping their children away from the limelight of the media. Furthermore, in the Instagram handle of both Romain and Marion, the two have not revealed the faces of their children. Looks like the pair is media conscious for their children.

Sacha Grosjean: Sacha is a female name of Greek origin providing the meaning of “defender; or protector of mankind.”

Camille Grosjean: Camille is a feminine name of Latin origin meaning “serving at the alter.” However, the name has also meaning in French that is “pure and perfect.“