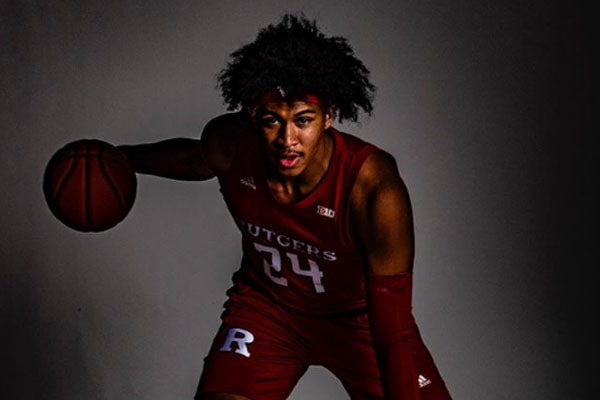 Ron Harper was one of the decorated American professional basketball players to play for four teams in the NBA. He is a five-time NBA champion. Well, going through his personal life, he married his wife, Maria Harper, and the couple has a son named Ron Harper Jr.

Now, many of you may not know Ron Harper’s son, Ron Harper Jr., as you know about the former basketball player. But his parents divorced each other after years of marriage. Well, not to worry, we are there to introduce you to Ron Harper Jr. So, stick with the article until the end to know some facts about Ron Harper’s son.

Ron Harper’s son followed his footsteps and pursued a career in basketball. He plays in the Forward Guard position for the Rutgers Scarlet Knights. Ron Harper Jr. was probably fascinated with his dad’s games and career, so he dreamt of continuing his father’s legacy in basketball. The 6′ 6″ tall player also has got a great physique for a basketball player.

He is a second-year sophomore from the Garden State. Similarly, Harper Jr. is a versatile and multi-dimensional player with tremendous upside and pedigree. Adding to that, he has the ability to contribute both inside and out due to his court vision, passing, and shooting.

Ron Harper Jr. played 31 games in total, starting in 18 games during his freshman year. He averaged 7.8 points and 3.1 rebounds as well. The baller ranked 7th in blocks, 10th in assists, and 14th in scoring & rebounding among Big Ten freshman in the regular season.

In his Sophomore year, Ron Harper Jr. was named Honorable Mention All-Big Ten and Second Team All-Met. Harper Jr. was the starter at forward in all 31 games and scored 12.1 points per game and was second with 5.8 rebounds and 25 blocks.

So, it looks as if Ron Harper’s basketball tips and tricks came in handy for his son. He seems to be focused and dedicated to becoming one of the best in basketball. Perhaps, he’s going to make his dad very proud of him in the upcoming years.

According to the Famous Birthdays, Ron Harper and Maria Harper have three children and also had a daughter from his previous relationship. So, it might be that Ron Harper Jr. has two siblings and a half-sister.

Nevertheless, he loves his parents and is close to both of them. He also loves other family members from the bottom of his heart. He also wished his mom, two grandmas, and god-mother on the occasion of Mother’s Day. Ron Harper Jr. loves being with his family and spending good times with them.

He is a family guy indeed. As for his love-life and relationships, he could be possibly single.

Handsome Ron Harper Jr. already has a verified Instagram account with over 13.2k followers. If he flourishes more as a basketball player, it’s no doubt that his followers can rocket in no time. He also is an active Twitter user and frequently tweets and retweets about basketball and all.

Smile through it all, can’t none of y’all knock me off my pivot😅💕

So, in all, Ron Harper’s son pursued a career in basketball like his dad. We hope to see him rise as one of the best ballers in basketball nad also wish him luck for his future endeavors.

According to the Hebrew, Scottish, Gaelic, and Old Norse origin, the meaning of the name Ron is “mountain of the strength of a ruler’s counselor.”