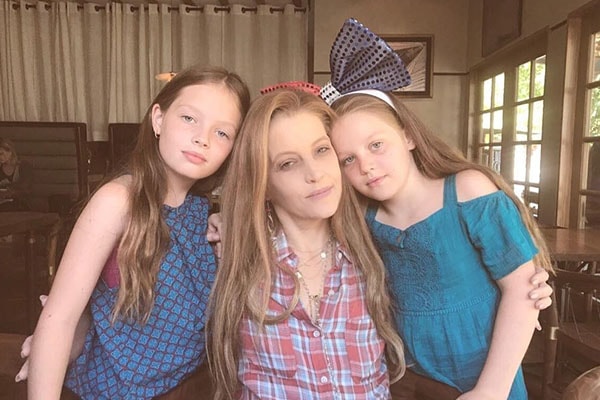 The twin girls are Michael’s first children ever, while they are Lisa’s third and fourth child. The twins also have a half-sister named Riley Keough. But Finley and Harper’s half-brother, Benjamin Keough, passed away on July 12, 2020.

The married couple was thrilled with the birth of their cute and attractive twin babies. In June 2016, as a result of a messy marital relationship, the couple filed for divorce. Apart from that, the twins, Finley Aaron and Vivienne Ann, are Elvis Presley and his wife, Priscilla Presley‘s granddaughters.

Finley Aaron Love and Harper Vivienne Ann Lockwood are the angel-like daughters of Lisa Marie and Michael Lockwood. The husband and wife duo are reportedly fighting a court divorce battle as of May 2019, so many are wondering which parent will get the beautiful daughters’ physical custody. Further, Lisa celebrates her cute daughters’ birthday with a blast, as shown in her Twitter post.

Finley, Harper and I making a wish tonight. Grateful to be happy, healthy and alive. And grateful for all of you ❤️💕❤️ pic.twitter.com/7r8iFCiHvd

Likewise, Lisa Marie is a mother to two more children, Riley Keough and Benjamin Keough, born with her ex-husband Danny Keough. The twin sisters likely hang out with their half-sister Riley and half-brother Benjamin and have a lot of fun.

In an Instagram post, the twin daughters’ grandmother, Priscilla Presley, shared an adorable picture of her spending time with her granddaughters, Harper Vivienne Ann Lockwood, and Finley Aaron Love Lockwood.

Moreover, Lisa Marie’s mother, Priscilla Presley, invites her granddaughters Harper and Finley to stay with her for weeks and even months. Aww! The girls are growing up in a very family-oriented environment, Priscilla once remarked.

Undoubtedly, the girls are living a comfortable lifestyle, and they’re growing up to be beautiful. The daughters see both their parents and are waiting for their custody announcement. After that, they will live either with their father or their mother.

As stated earlier, the twins, Finley and Harper’s half-brother, Benjamin Keough, died by suicide at the age of 27 in Calabasas, California. Benjamin’s friend said that he struggled with the ‘pressure’ of the Presley Family name before his tragic death. The pressure to live up the family name contributed Keough’s struggles.

“Sometimes he struggled with depression, which is a serious thing with [the coronavirus pandemic] and everything happening right now and everybody, being locked in the house. It takes a lot. I wish I could have been there.”

Finley and Harper, at such a young age, must be going through some tough times hearing about this sad and devastating news. Everyone in the family is entirely heartbroken. Nevertheless, Lisa is trying to stay strong for her twins and oldest daughter, Riley.