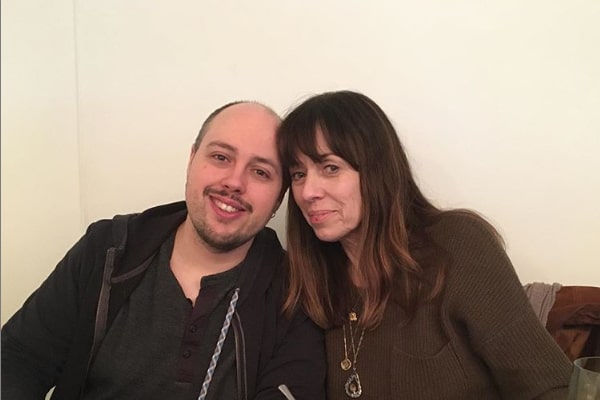 Mackenzie Phillips' son, Shane Barakan is a very private person and is living away from the flashy world. Image Source: Philips' Instagram.

Mackenzie Phillips is an American actress and singer who started her career since she was 12. Phillips is known for her work in American Grafitti, So Weird, etc.

Although Phillips has been in the entertainment industry and her career is growing significantly, her marital status has been pretty tumultuous. She was married thrice, but her marriage did not survive. Throughout the wedding, she has a son from her second marriage with an English rock guitarist, Michael Barakan, professionally known as Shane Fontayne.

Shane Barakan Is A Singer/SongWriter

The former teen star, Mackenzie Phillips, gave birth to her son, Shane Barakan, in 1987 with her second husband, Michael Barakan, aka Shane Fontayne.

Mackenzie Phillips is a proud mother of a beautiful singer and a gifted song-writer son, Shane Barakan. He has decided to follow his father, Michael, and grandfather, leader of the vocal group The Mamas & the Papas, John Phillips.

Shane has released a song called Heavens Right Here With You featuring James John. Besides, he has performed a few stage shows and published a few cover songs on his Facebook profile.

Other than that, Phillips’ son is away from social media scrutiny and is leading a private life. Although he is very dedicated to following his fathers’ footsteps, he is still grounded and pursuing his own.

Likewise, Shane also makes frequent appearances in Phillips’ social media. The former teen actor, Mackenzie, is never tired of praising her sons’ ability and his impact on her life. Thus, it is fair to conclude that Mackenzie and Shane share a pretty strong bond.

Is A Secretive Person

Despite being a star child, Mackenzie Phillips’ son, Shane Barakan, is a very private person. Aforementioned, Shane Barakan is living a tranquil life.

Shane Barakan is very grounded and is away from every social media. Interestingly, his Facebook has been inactive for over a decade and includes three to four cover songs.

Although Barakan is not present in any form of social media, he frequently appears in his mother, Mackenzie Phillips’ Instagram. Let’s hope we get to see Shane Barakan and his talent exclusively in the coming days.

Only Child Of Actress, Mackenzie Phillips

The gifted singer-songwriter, Shane Barakan, is the only child of Sacred Journeys actress, Mackenzie Phillips, and guitarist, Michael Barakan. The pair were married from 1986 to 2000 and had Shane in between their years of marriage in 1987.

We are aware of Mackenzie Phillips’ drug addiction and her unfortunate relationship with her father. Regrettably, she was highly intoxicated and used cocaine when she was pregnant with Shane.

According to People, she is not apologizing to Shane about the pregnancy. She continued she would make up her action by doing better. Fortunately, Mackenzie Phillips made a U-turn and worked as a drug rehab counselor at Breathe Life Healing Center.

Fortunately, Shane became the epitome of Mackenzie’s turn over. He knew his mother’s drug abuse and is adamant about staying away from such habits.

Shane Barakan belongs to a family that has glorified the music industry. As mentioned above, Barakan’s mother, Mackenzie, is an actress and singer. Similarly, his father, Shane Fontayne, is an English guitarist.

Shane Barakan’s parents were married from 1986 to 2000 and divorced. However, they maintained a good friendship and raised their son. Fontayne’s son became a prime reason for Phillips’ recovery and is happy in their individual lives.

Father-figure is essential to learn about masculinity, the growing process, responsibilities, and emotions. Furthermore, they are the protective figure one can look up to. However, Shane Barakan’s mother, Mackenzie Phillips, had a bitter relationship with her father.

In Phillips’ memoir, High On Arrival was released in 2009; she disclosed a very vast and dark side of her life with the world. Furthermore, when she appeared on The Oprah Winfrey Show for an hour-long interview, she revealed that her father introduced her to drugs at the age of 11 and injected her with cocaine.

During the interview, she read an excerpt from her book, which unraveled her troubled relationship with John. She revealed that her father had raped her at the age of 18 and, ironically, the night before her marriage.

When Phillips found herself having intimate relationships with her father, she confronted him months later. Mackenzie asked why he had raped her to which John denied the rape allegation and suggested it as ‘making love.’ How sadistic!

Mackenzie further told Winfrey of having communal intercourse but described the initial incident as rape. She also said that it was an abuse of power, betrayal of trust.

Shane Barakan’s mother, Phillips, had an abortion believing that she had conceived her own father’s child and ended the incest. Some people believe in Phillips’ allegation while a few deny them. Whatever had happened, we empathize with Mackenzie and applaud Shane’s mother for her bravery, of sharing and overcoming such dark place in her life.

As of now, Mackenzie is a celebrated personality, and her son, Shane, is doing great in his career despite staying away from public scrutiny. Subsequently, it’s a woman’s victory over her violent past and a mother’s victory for raising a god-loving child.

Let’s hope we get to hear and see more about Shane Barakan in the coming days.