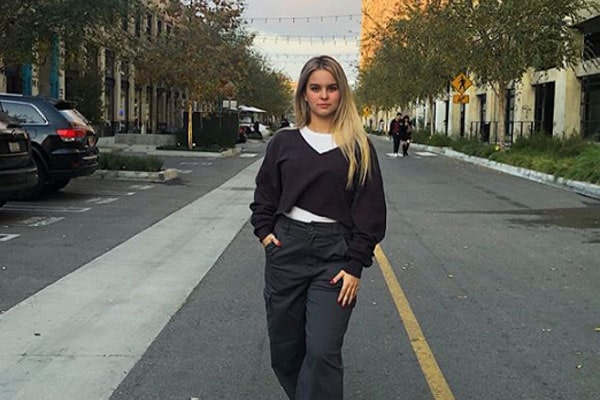 Born in December 2001 in New Jersey, gorgeous Kaya McKenna Callahan is Eva LaRue‘s daughter with her ex-husband, John Callahan. She is the only child from the ex-couple and has been living in Los Angeles. Kaya’s parents divorced each other in 2005. She is extremely fortunate to be the daughter of such talented celebrities. Kaya’s mom, Eva, is an American actress, so was her dad, John, an American actor.

Prior to Eva LaRue and John Callahan’s marriage, Kaya’s mother Eva LaRue was married to John O’Hurley from 1992 to 1994, whereas her father John was in a married relationship with Linda Freeman from 1982 to 1994. Kaya’s mom Eva was also married to Joe Cappuccio  from June 26, 2010, to 2014. Keeping things aside, let’s know five interesting facts about Kaya McKenna Callahan:

Kaya McKenna Callahan Is An Avid Traveler, Explorer, And Activist

Eva LaRue’s daughter, Kaya McKenna Callahan has grown up to become an avid traveler and explorer. Rather than following her parents’ footsteps to pursue a career in acting, she chose a unique track. She has been to lots of countries and the numbers seem to rise every year. Prospecting nature, culture, traditions, and people of different nations probably gives her joys.

Not only that but she even writes about her travels and adventures on her self-titled website called ‘Kaya Callahan.’ Going through Kaya’s Instagram Profile, its rambled with tons of adventure photos. Perhaps, more fascinating writings are about to add up on her travel diary in the coming days.

Similarly, Kaya, as a passionate activist, is running and raising several awareness programmes and campaigns. She has been trying to combine the adventures with charitable outreach whenever possible. For instance, Kaya is running the #StillAGirl campaign through her website to end child marriages in the USA.

She Was Invited To The Golden Globes 2015

Lovely Kaya McKenna wrote a tribute memoir about Robin Williams after his death and surprisingly got the opportunity to attend Golden Globes 2015. The writing was also published by the Hollywood Foreign Press/ Golden Globes website. She got to meet celebrities such as Oprah Winfrey, Amy Adams, share some chocolates with Harrison Ford. Kaya also got a photo with Channing Tatum at the backstage.

Kaya captioned the photo by saying,

My dream is to go back again whether it’s to guide stars backstage, to be nominated for a movie, or even pick up trash! I absolutely love the Golden Globes

With the work, she has been doing and as a keen activist, no wonder she might be called back again at the Golden Globe awards for an award.

It’s very depressing news that Kaya McKenna’s dad, John Callahan passed away on March 28, 2020. Callahan, who was best known for his roles of Edmund Grey in the TV series, ‘All My Children’ died after suffering a stroke a day before. His ex-wife, Eva, and former co-stars announced his death on Instagram. Kaya must have been devastated to hear this sad news of her loving father. We cannot even imagine Kaya’s pain that she has to go through.

Although this incident may have brought tears into Kaya’s life, she will probably come out even stronger and make her father proud. And we only wish Kaya to thrive even further in her career.

As stated earlier, Kaya is really enthusiastic about sharing her adventure stories and experiences. But when it comes to sharing details of her love and relationship status, it seems like she has hidden it under the curtains from the spotlight and media. Perhaps, there is a mystery man in Kaya’s life who’s giving lots of love and happiness. Kaya probably does not want anyone to interfere with her personal life.

Or it could be the other way around. As seen on Kaya’s Instagram account, she must be enjoying her life traveling and exploring the world. Certainly, she is focusing on her career at the moment and could be living the single life to the fullest. Let’s cross our fingers and hope she opens up about her love affairs pretty soon.

Well, as per Kaya’s website, she has mentioned her relationship status stating herself as a lover of the Yankees and all things Derek Jeter. With that said, she is possibly one of the biggest fans of the American baseball team, New York Yankees and baseball player and executive, Derek Jeter.

Kaya’s dad, John was also a huge Yankee fan. Hence, John Callahan must have been the true inspiration behind Kaya’s love for Yankees.