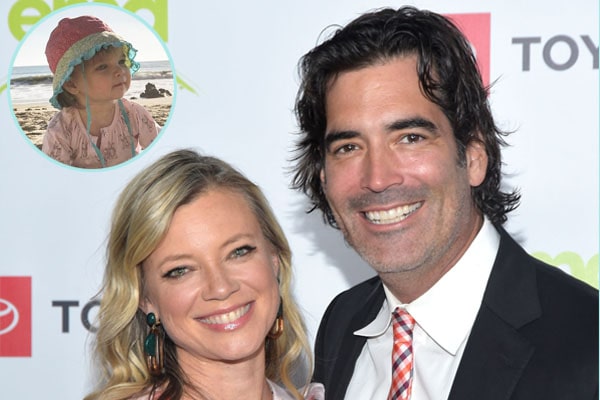 Amy Smart is a gorgeous actress best known for Just Friends, The Butterfly Effect and many more. She is not only a very talented actress but also an accomplished wife and a proud mother. She and her husband Carter Oosterhouse tied their knot back on September 10, 2011. Amy’s husband Carter is an American television personality and model. Both share a lovely daughter named Flora Oosterhouse.

Amy Smart’s daughter Flora Oosterhouse was born on 26th December 2016. She is as lovely and adorable as one can get. In fact, she has inherited her father’s good looks and his graceful pride. She is just like her father’s little copy, all fuzzy and cute. She is fearless, adventurous and loves exploring new exciting things.

Amy Smart’s daughter Flora Oosterhouse is a blessing according to her mother. Before she was born, Amy and her husband struggled with heartbreaking fertility issues. In an interview with People, Amy said when she and her husband got married, they didn’t know if she was going to get pregnant right away or not. Many years passed by and they were just on this roller coaster. Nothing was working and Flora’s parents started to wonder if they were ever going to be parents or not. Later, they decided to use a surrogate mother to give birth to their lovely daughter Flora.

Furthermore, Amy shared a lovely picture of her daughter and an emotional caption dedicated to the couple’s loving surrogate. She wrote that she was feeling so grateful to have her baby girl in her arms and she thanked their lovely surrogate for carrying little Flora.

When Amy Smart’s daughter Flora Oosterhouse was small, she used to pull herself up on everything. Her first milestone was to exhaust her parents by chasing her around the house and that was the best thing that happened to Amy and her husband in that period. Amy likes to call her little daughter very curious which little Flora’s father agrees and has a different name for her. He likes to describe his daughter as a super chilled child.

A BIG Problem Tinker & Scrap https://t.co/A874MrKjdr via @amazon. Buy it on Amazon, Jane did.. pic.twitter.com/Olzla8EcCl

Moreover, the biggest obstacle facing their family is traveling, and they say traveling with the little girl is scary. And while a lot of things have changed since the birth of the little angel, Amy and Carter have mastered the art of multitasking. Taking care of the baby girl is the best and they just want to have fun but sometimes that can get too annoying. But that’s the most remarkable thing of becoming parents, Amy points out.

Furthermore, Little Flora’s date night with mom Amy was rather exciting as it was the first time she ever sat for an entire dinner. Flora’s mother shared a lovely picture of her reacting to the food brought to her. Her expressions were priceless and really funny. Her parents treat her like a little princess and why won’t they, she is one.