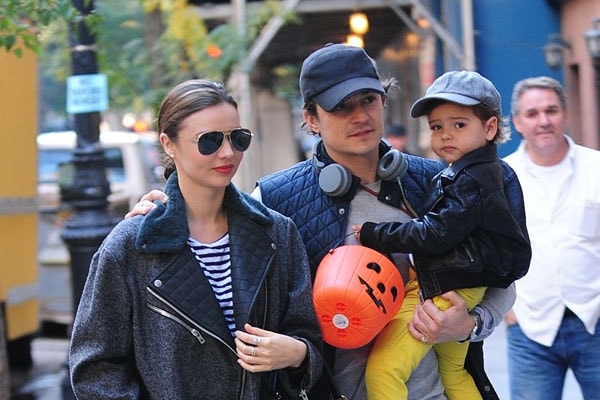 The LOTR star Orlando Bloom‘s son Flynn Christopher Bloom was born on the 6th of January 2011. During the time of the birth, the little Flynn Christopher weighed in at 9 pounds and 12 ounces. Orlando had Flynn with his ex-wife Miranda Kerr.

Flynn Christopher Bloom is the only between Orlando Bloom and Miranda Kerr, though he has got a younger half-sibling named Hart Spiegel. Hart Spiegel is Miranda Kerr’s son with her current husband, Evan Spiegel.

In the past, Flynn Christopher Bloom was often spotted alongside his parents, Orlando and Miranda. But it looks like the ex-pair has decided to raise their little one away from the media limelight. Like many celebrity parents out there, Orlando Bloom also rarely uploads a photo of his 8-year-old son Flynn. And whenever he does, Orlando tends not to reveal the face by either putting a sticker over it or just capturing the back.

Orlando loves captioning his photos, and when he uploads the picture of his little one, his caption is all about love for his youngling. As for Miranda, she doesn’t post photos of her children and keeps her personal life private. It seems as if the little Flynn Christopher Bloom spends most of his time with his father, Orlando.

Flynn Christopher Bloom Looks Like A Mini Version Of His Father

Not many people might have seen what Flynn Christopher looks like now, but we are sure he must look like his old man. Looking at the old photos of Orlando Bloom with his son Flynn Christopher Bloom we can see how the father-son duo shared an uncanny resemblance. In the past, they were often spotted in different events and places having a lovely time.

Orlando Bloom’s son Flynn Christopher Bloom has greatly inherited his good genes, and now only future will let us know if Flynn will work in a movie or not.

The name Flynn is an Irish surname. It is the anglicised form of Irish Ó Floinn which means “descendant of Flann.”

As for the name Christopher, it is a Greek baby name which means a carrier of Christ.