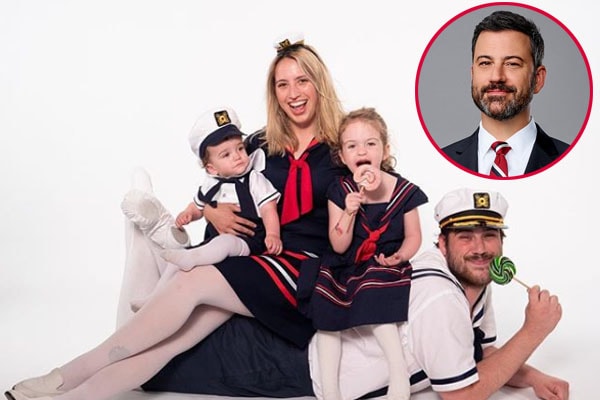 The TV host Jimmy Kimmel is a proud father of four lovely children, two daughters, and two sons. Jimmy has got two children named Katie Kimmel and Kevin Kimmel with ex-wife Gina Kimmel, and with his current wife Molly McNearney, he has got two kids named Jane Kimmel and William Kimmel.

Let’s get to know more about each of Jimmy Kimmel’s children individually:

The gorgeous Katie Kimmel aka Katherine Kimmel is Jimmy Kimmel’s eldest daughter whom he had with his first wife Gina Kimmel aka Gina Maddy. Katie Kimmel was born on the 28th of August, 1991.

Like Jimmy, his youngling is also an artist but of a different field. Katie works in the Mojave Desert, California and received her degree of Bachelor of Fine Arts from The School of the Art Institute of Chicago. She basically studied ceramics and paintings and loves writing biographies in the third person.

Jimmy Kimmel’s daughter Katie Kimmel has got her website where she sells different stuff like t-shirts, ceramics sculpture and more. Katie has also appeared as an actress in TV shows such as Crank Yankers and The Man Show.

Kevin is Katie’s younger brother and the eldest son of Jimmy Kimmel. As stated above, Kevin is Jimmy Kimmel’s son with ex-partner Gina Kimmel. Kevin was born on the 19th of September 1993 in Arizona.

Like Katie, Kevin has also appeared on The Man Show and Crank Yankers. Alongside that, Kevin has worked as a sound mixer and production assistant on shows such as Tosh.0, Tubbin’ with Tash, and The Meltdown.

Alongside that, Jimmy Kimmel’s son Kevin Kimmel is in a romantic relationship with his girlfriend, Nicole Francisca Quiroz. The lovely couple of Kevin and Nicole have been together for over ten years now.

The cute Jane Kimmel is the youngest daughter of Jimmy Kimmel whom he had with his current wife, Molly. Jane was born on the 10th of July, 2014 in Los Angeles, California. Jane’s father Jimmy revealed the name and the face of baby Jane after 12 days of her birth.

Kimmel has got a lovely bond with his daughter Jane. He keeps uploading photos of her and shows people how much of a cute daughter he has got.

The tiny William Kimmel is the youngest among the four children of Jimmy Kimmel. Jimmy and his wife Molly had their little on in the 21st of April, 2017 in LA. Unfortunately, the little William John Kimmel was born with tetralogy of Fallot, a rare congenital heart defect. He had to undergo surgery at only three days after his birth.

Nevertheless, the 1-year-old William is all excellent and doing good.

Plus, Jimmy Kimmel has got a friendly and lovely bonding with each child of his.

Katie Kimmel: The name Katie is a short or a pet form of the name Katherine which is related to a Greek word “katharos” which means pure.

Kevin Kimmel: Kevin is an Irish name which means handsome by birth.

Jane Kimmel: Jane is an English baby name which means Jehovah has been gracious.

William Kimmel: William is also an English baby name which means will or resolute protector.