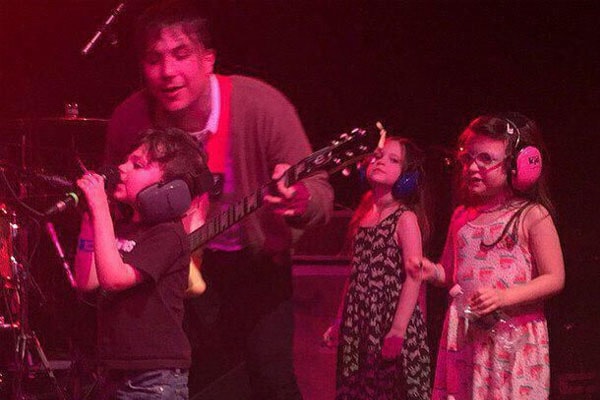 Frank Iero's is a father of three children; a twin daughters, and a son. Image Source: Pinterest.

American musician, Frank Iero is a proud father of three children. He had all of the kids together with his wife Jamia Nestor. The lovely couple got married back in the year 2007 and are together ever since. Frank Iero’s children include twin daughters, Lily Iero and Cherry Iero, and a son named Miles Iero.

Born on the 31st of October 1981, Frank Anthony Iero, Jr. aka Frank Iero is the backup vocalist and rhythm guitarist of the rock band, My Chemical Romance and post-hardcore band, Leathermouth. He even has a solo punk rock project titled Frank Iero and the Future Violents.

Twin Daughters Were Born In 2010

Frank Iero’s twin daughters, Lily and Cherry Iero were born on the 4th of August 2010. They both were born three years after their parents got married in February 2007. The birth news of the cute sisters was even announced on the My Chemical Romance website. Dating for several years, Frank finally proposed to his gorgeous wife in 2006 during the recording of the album The Black Parade.

Also, former My Chemical Romance guitarist has roman numeral tattoos regarding the births of his twin daughters.

Frank Iero’s son Miles was born on the 6th of April 2012. The father has often tweeted about Miles including his siblings on his insanely popular Twitter handle. He refers to Miles as the most handsome little monkey and tells his fan that being a father is the world’s best job ever.

Frank Iero’s children also seem to enjoy their father’s concert and back in the year 2015, in Sayreville, NJ, the kids joined him on stage at Starland Ball Room. No wonder why the stage was lit all of a sudden.

There is an obvious understanding among the family of five with each other. All seem strongly bonded and happy together. As of now, 7-years-old Miles including his elder twin sisters goes to an elementary school. However, details regarding their schooling have not been revealed yet.

Cherry Iero: Cherry is a feminine name of French origin meaning “Dear one or darling.“

Lily Iero: Lily is a beautiful and lovely girl’s name of English origin meaning “a flower.”