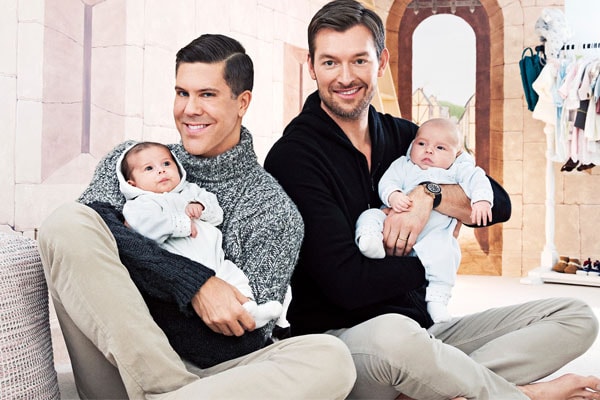 Fredrik Eklund and Derek Kaplan‘s twins, Fredrik Eklund Jr., and Milla Eklund were born on the 28th of November 2017. Derek is currently raising his twin babies together with his partner Fredrik Eklund. The twin babies’ parents, Derek and Fredrik tied their wedding knot on the 9th of February 2013 in Little Palm Island, Florida Keys.

Eklund Jr. and Milla have an older half-sibling named Kai Kaplan. Kai was born to his father Derek after donating his sperm to a female couple when he lived in London.

The Twins Were Born Via Surrogacy

However, the love birds have not yet revealed who the surrogate is. Also, it is not known if the same woman donated the egg. The parents of the twins expressed their joy at finally welcoming their children. The attempt was successful after their initial attempts at surrogacy resulted in two miscarriages.

The Twin Children Are Looked After By Their Joint Father Couple

As mentioned earlier, the twins, Fredrik Jr and Milla are growing up in Roxbury, Connecticut. The adorable babies are taken care of by the lovely couple, Derek and Fredrik.

The parents of the two told People magazine:

“The kids are sleeping well, but sometimes I think those two have a little side meeting. They’ll decide, Okay, today you’re going to be bad and then when you fall asleep, I’m going to be bad. They’re in cahoots!

Twins are double the work, but definitely double the joy! I read all the baby books, started changing diapers on dolls, I even went to Twiniversity. It’s like going to college to learn about having twins.”

As mentioned before, Derek Kaplan already has one son, Kai. He donated his sperm to a female couple when he lived in London. Fredrik and the Zimbabwe-born painter shared their vows in a televised wedding in 2013. The pair met in Greece three years earlier.

Furthermore, the twin’s parents had been very open about losing two sets of twins to miscarriage.

Fredrik Eklund Jr.: Fredrik is a male given name of Germania origin. It provides the meaning of “Peaceful Ruler.”

Milla Eklund: Milla is a female given name of Slavic Hebrew origin. It gives the meaning of “gracious or dear.“
For the latest updates on Entertainment, Celebrity Babies, YouTuber follow eCelebrityMirror.