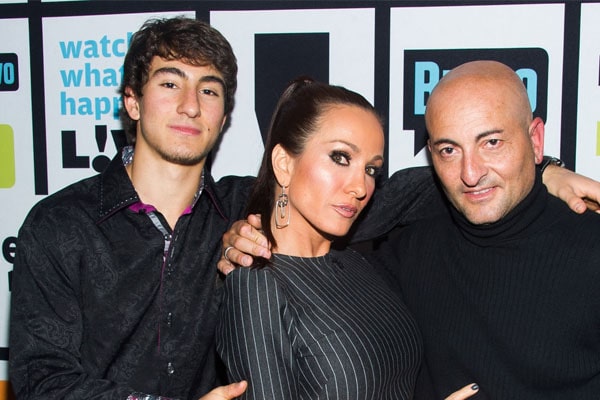 Giovanni Aprea is the only son of reality star Teresa Aprea and her husband Rino Aprea. Image Source: Getty Images.

Teresa Aprea a reality tv star best known for Reality Housewives of New Jersey firstly tied her knot with husband Rino Aprea in April of 1991. Her husband is a National Tv Personality and a restaurateur. Teresa and her husband share a bit of a complicated relationship, and after sharing seven years of marital life they separated. However, after 11 years apart they remarried again in 2010. Both share a son named Giovanni Aprea, born on February 1, 1996.

We were first introduced to the Aprea family in the sixth season of RHONJ. Since their arrival, they have become fan favorites. People have come to love the dynamic duo of Teresa and her twin sister Nicole Napolitano Mauriello. Not only that but the fans have adored the presence of Teresa Aprea’s son Giovanni Aprea. So, let’s get to know more about Teresa and Rino’s child.

Like every mom on the planet, Teresa adores her son. She loves spending time with him. The mother-son duo is usually joined by Teresa’s niece Olivia. Nonetheless, father Rino has also been spotted traveling with Giovanni and his mother. In fact, Teresa loves traveling with her family. She says the best thing about life is getting to travel and visit new places. Meeting new and interesting people seems to be something that she likes. Plus, having Giovanni beside her never seems to annoy her. Well, the mother-son share a lovely bond that reflects through their actions and the picture mom Teresa shares on her Instagram.

Furthermore, Teresa and her son love making Zeppoles together. She has shown time and again how much her son matters to her. Once she shared a picture of her and little Giovanni hugging each other with a caption that referred her son as her life.  Also thanking him for all the laughter and joy he has brought to her life.

Unlike many celebrity kids, Teresa Aprea’s son Giovanni Aprea seems to not enjoy media’s attention. He is a person of privacy and doesn’t want others to interfere in his matters. Maybe it’s the reason he has kept his social media private. We all know how much of a comfortable life Teresa and her husband live. So, we can assume Giovanni also lives a comfortable life outside the limelight.

Moreover, we can just imagine that the son of such a well celebrated reality star is preparing himself for his big debut. May Teresa Aprea’s son Giovanni Aprea is waiting for the right moment to make it big in Hollywood. He is such a good-looking lad with such good physics. Surely if he follows his mother’s footstep he is going to make his name in the show business.

However, if Giovanni is not interested in the show business he may as well follow his father’s footsteps and become a restaurateur. Whatever he chooses to become we are sure he has a bright future ahead of him.