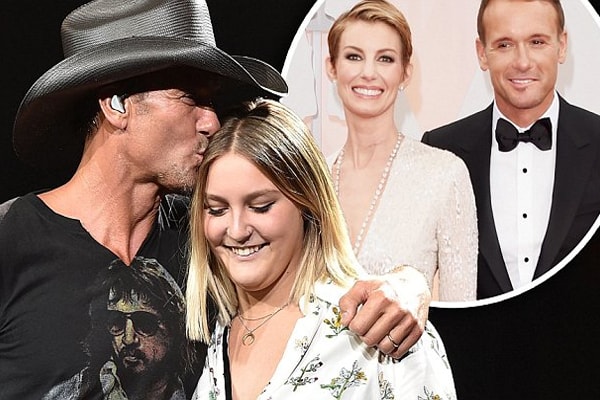 Singer Tim McGraw‘s daughter Gracie McGraw with his wife, Faith Hill was born on May 5, 1997. She has two sisters named Maggie Elizabeth McGraw and Audrey Caroline McGraw. Gracie is the eldest daughter of Tim McGraw and Faith Hill.

Gracie is extremely lucky to have such wonderful and talented parents. Her dad, Samuel Timothy McGraw aka Tim McGraw is an American country singer as well as an actor. Similarly, her mum, Audrey Faith McGraw who is known as Faith Hill, is an American singer and record producer.

Out of three daughters, Gracie McGraw seems to have a great voice and most of the people who have heard Gracie sing have admired her. The beautiful Gracie not only sings but also plays the guitar. Her mum Faith revealed that Gracie taught herself how to play the guitar which proves that practice makes everyone perfect.

When Gracie was in high school, she formed a band in her basement. In fact, she did not even tell anything about that to her mum and dad. Now that she has grown up, she is very focused and maybe wants to make her career as bright as she can.

Moreover, Gracie may have been learning all the minor and major things from her parents. This surely gives the correct shape to become a professional singer for Gracie. Tim and his wife, Faith are very proud of Gracie. Her mum even said that she lights up every room she enters and they are so proud of her in every way.

Gracie McGraw Is Not Relying On Her Famous Parents

Tim McGraw’s daughter, Gracie McGraw is not relying on her parents but is working very hard to brighten her career. As she is blessed with a great and beautiful voice, she might be doing everything to prove her worth.

So, Gracie has also stepped up and has joined her father onstage for duets. Tim had even encouraged her to record for her debut album. She never relied on her famous parents. The talents that she has and the ones she created herself might make her a professional singer someday.

Gracie McGraw Does Not Seem To Use Social Media

It looks like Gracie is very focused on her career that she wants to avoid the distractions in her life. Or maybe she has but a private account so that no one knows any kind of update about her. Although her parents post photos of her, they do not tag Gracie. So, that can take us to a point that Gracie is not fond of using any social media accounts.

The name Gracie is an alternative form of the word ‘grace’ meaning ‘kindness, mercy or favor’.