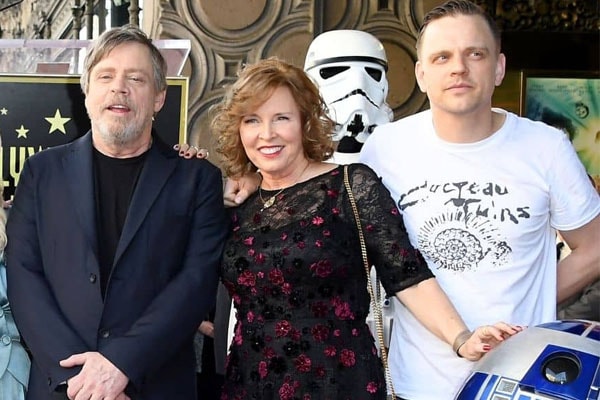 Griffin Hamill, Mark Hamill‘s son with his wife Marilou York was born on the 4th of March 1983 in San Francisco, California. Griffin is an American actor, best known for his work on movie Silent Night which was released in 2016.

Griffin’s parents Mark Hamill and Marilou York tied their wedding knot on December 17, 1978. Griffin grew up along with his two siblings, Chelsea Hamill, and Nathan Hamill. All two of Griffin’s siblings including him have actually appeared in Star Wars: The Last Jedi.

Griffin Hamill Is A Visual Artist

Just like his father Mark, Griffin Hamill has also chosen acting as his career. However, it seems that Griffin chose his primary profession as a visual artist. As an artist, he likes to visualize his imagination in drawing and painting. According to Griffin’s Twitter account; he is an operation manager instructor and student at MuDo Integrated Martial Art, Santa Monica.

Carlos Santana drawing I made at art store I worked at, ’09. Photo of him playing guitar in LA Times was my inspiration. #boredom #retail pic.twitter.com/krUfsm9bEm

Likewise, Griffin has also starred in a short role of Nightclub Patron in the fan-favorite movie Silent Night. He has also got a cameo along with his father and sister in the movie Star Wars: The Last Jedi.

Furthermore, from Griffin’s Instagram, it seems that he could be in a relationship. Griffin and his possible girlfriend Anna Rose Gray seems to enjoy their time together.

Griffin Hamill Is Not In Limelight As His Father

Along with exceptional commitment and determination, Mark Hamill’s son Griffin is a born leader who is very much driven to his goal. He is not seen that often at events. And by looking at it, we can assume that Griffin prefers staying away from the media limelight.

Griffin is a boy’s name of Latin Greek origin which gives the meaning of “a fierce or dangerous person.”