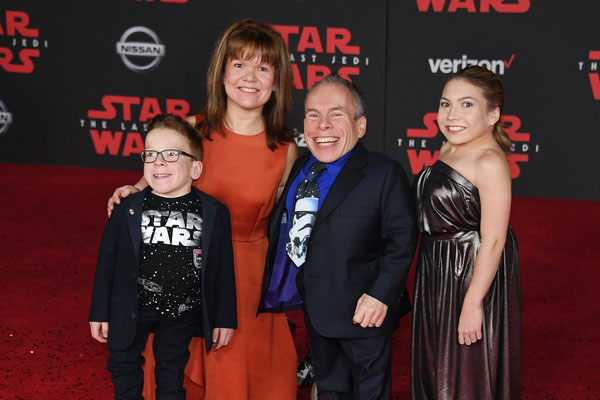 Harrison Davis, Warwick Davis’ son with his wife Samantha Davis was born on February 28, 2003. He has an elder sister, Annabelle Davis. Not many people know but Harrison Davis’ mom sadly had miscarriage twice in 1991 and 1993 before Harrison came into the world. George Davis and Lloyd Davis were the two babies who couldn’t see this beautiful world.

Harrison Davis’ father, Warwick Davis is a famous actor who played the role of Ewok Wicket in Star Wars Episode VI: Return of the Jedi. Warwick Davis had a disease known as Spondyloepiphyseal dysplasia congenital(SED) since birth. It is a rare form of dwarfism. Even though, Warwick’s family have tallness problem they are having the best life they can possibly have.

Harrison is a very hyped and thrilling person. He loves his family and always brings happiness out in the family. He has let his weakness go away and is enjoying his life to the fullest.

Harrison Davis Enjoys Every Bit Of His Life

Warwick Davis’ son, Harrison Davis uses Instagram and Twitter to know what’s going on in the world. Harrison Davis loves to have enjoyment in his life. Going through his Instagram account, we possibly think that he loves to explore different places.

Also, he is so much attached to his family and has posted a lot of photos of his family. It really shows that Harrison obviously can’t live without his family. He also likes to have fun all the time and not let sorrow control his life. The adorable Harrison is a dog-lover and has a pet dog named  ‘Sherlock’.

Not only that, Harrison likes to click photos with mostly everyone he knows. as well. He has posted a lot of photos of him with his family members. It clearly displays that Harrison is like a love-spreader.

Besides that, Harrison has a soft spot for football. He is a fan of Peterborough football club and supports the team. We have to admit though, Warwick Davis’ son is very extraordinary in nature.

Harrison Davis Is Also A YouTuber

Warwick Davis’ son, Harrison Davis fancies playing exciting video games. He has his own YouTube channel “HarrisonXGamer Davis” where he uploads videos of himself playing different games. Most probably he loves playing Fortnite and Minecraft.

He has 1.4k subscribers in his YouTube channel as of April 2019. Since his last upload was ten months ago, we assume he is busy with other schedules of work. If you guys want to watch games being played by Harrison, you can even subscribe to his channel.

The name Harrison is originated from the Middle Ages meaning ‘Son of Henry.’.