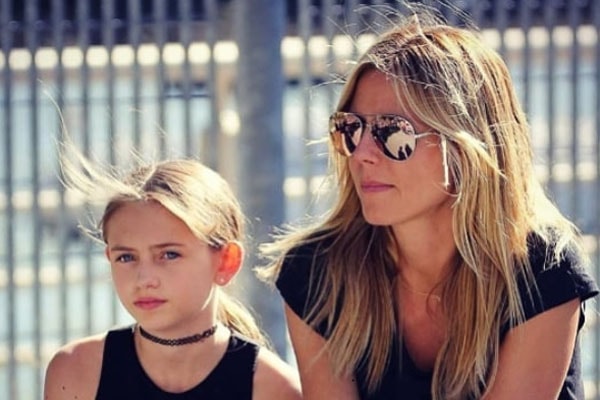 The German model Heidi Klum‘s daughter Helene Boshoven Samuel was born on the 4th of May, 2004. Helene is the eldest daughter of Heidi Klum whom she had with her ex-partner, Flavio Briatore.

When Helene Boshoven Samuel was born, her biological father Flavio wasn’t present there and later on Heidi’s ex-husband Seal adopted Helene. The pretty Helene is the only child of Heidi Klum and Flavio Briatore, though she has got three half-siblings from her mother’s side, Johan Riley Fyodor Taiwo Samuel, Henry Günther Ademola Dashtu Samuel, and Lou Sulola Samuel.

Among all the four children of Heidi Klum, her eldest daughter Helene Boshoven Samuel looks like her doppelganger. Along with a fair complexion, the mother-daughter pair also has similar coloured hair. Helen Boshoven is often spotted alongside her model momma Heidi.

Well, the 14-year-old Helene is yet to have her own social media account, but she has got a fan page under the name of “leni_klum_” which uploads photos of her. People must be wondering why the name Leni because her family has nicknamed the cute Helene Leni.

We all know how huge and successful model Heidi Klum is, we wonder if she will also pursue her daughter to follow her footsteps into the world of modelling.

As stated earlier, when Heidi gave birth to Helene, her biological father Flavio Briatore was absent. Only singer Henry Olusegun Olumide Adeola Samuel aka Seal was present there. Despite talking on the phone for two hours every day, that didn’t let the relationship between the father-daughter duo of Flavio and Helene to grow. And on December 2009, Helene Boshoven was officially adopted by singer Seal and took their surname Samuels.

Even though Heidi Klum and singer Seal got divorced on April 6, he is still present around Helene and acts as a father figure which he is.

The name Helene has a Greek origin which is derived from the root ēlē meaning light, torch, bright.

As for the name Boshoven, it is kind of a unique name which parents don’t usually use. It is a type of surname which was evolved as a way to sort folks out into groups either by their occupation, clan affiliation, etc.