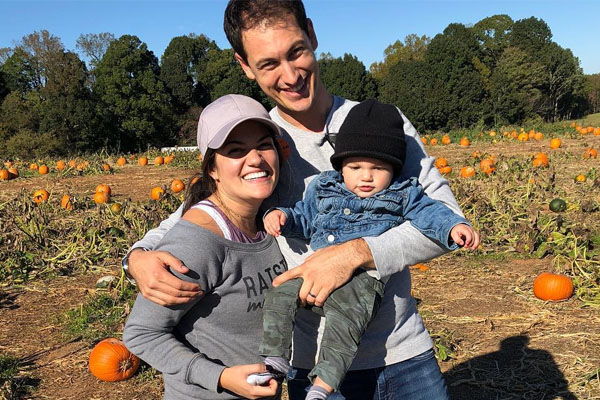 The American professional stock car racing driver, Joey Logano’s son, Hudson Joseph Logano, was born on Jan 4, 2018, as the only child of the family. The firstborn of the family, Logano Jr. shares an intimate and intense relationship with his parents.

The proud parent, Joey Logano exchanged the rings with his childhood sweetheart, Brittany Baca and eventually walked down the aisle with his now-wife on December 13, 2014. The happy family shares a lavish house in the Huntersville, North Carolina and bond between the parent-child is admirable.

The stock car racing driver, Joey Logano and his wife, Brittany, welcomed their first bundle of joy at the month of January. The NASCAR driver announced the arrival of the new member of the family, Joey Logano, Jr., with a beautiful photo of the newborn and his mom in the hospital. The young baby boy was born a few days early as the couple announced the pregnancy in June.

Prior to the arrival of the adorable Hudson, the blissful couple had a perfectly NASCAR gender reveal in the summer. The pro athletes took the basic gender reveal premise and turned into an engine-blasting, loud, adrenaline-fueled thrill ride. As the car made its way around the pavement, the dust revealed the gender of the baby.

The NASCAR star Joey snaps a 36-race winless streak by winning the Monster Energy Cup Series race at Talladega Superspeedway. The winning was sweeter for Logano as he was celebrating his Victory with his son, Hudson, for the first time,

The lovely name Hudson is the transferred use of an Anglo-Scottish surname. The name “Hudson” originates from the medieval personal name “Hudde”. Despite having three possible origins, the name is the pet form of Old Saxon name “Hugh” which means “Heart, mind, and spirit”.

The masculine name “Joseph” originates from Hebrew and is in the Hebrew Bible as “יוֹסֵף”. The name is translated from יוסף יהוה‬ Yosef YHWH as Yahweh or Jehovah shall increase.