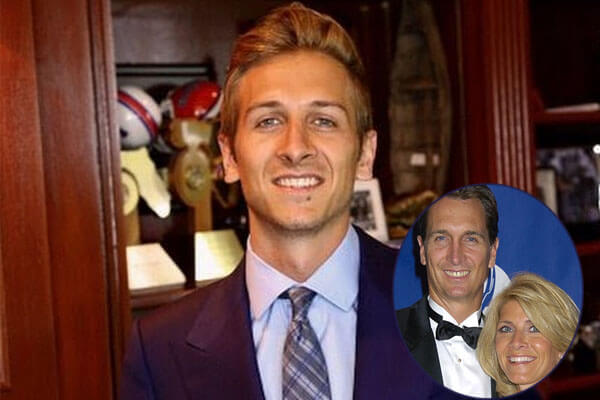 American sports broadcaster, Cris Collinsworth’s son, Jack Collinsworth aka Jac Collinsworth, was born to his longtime wife, Holly Bankemper in 1995. He is the youngest child of his parents. He has three siblings; a brother and two sisters. Jack’s parents have been happily married for over three decades.

Jack’s siblings are Austin Collinsworth, Ashley Collinsworth, and Katie Collinsworth. The talented Jac is pursuing a career in NFL commentary and match analysis like his father Cris. As for Jac’s relationship status, he is currently dating his girlfriend Nicole De Francisco.

Apart from being the son of Cris Collinsworth, Jac Collinsworth had also made a name for himself. He enjoys a successful and relaxed life. Like his brother, Austin Collinsworth, Jac used to be a Highlands High School football player, in which he rocked the field as a quarterback. Not only that, but Jack is also a graduate from the prestigious Notre Dame University in Indiana. We believe that with his parents’ blessings, Jac will continue to be successful in any field of career he pursues.

Further, in 2017, the smart and talented Jac joined ESPN’s weekly show “Sunday NFL Countdown“  as a reporter. Jac is still young and could learn much from his father Cris, who is a football analyst and former football player in Cincinnati Bengals. In a Twitter post, Cris congratulated his son on joining the ESPN show, and mentions that he is a “proud papa”.

Apart from all the football talk, Jac also likes to show his romantic side to the world. According to a post on his Instagram account, Jac is in a romantic relationship with his girlfriend, Nicole De Francisco. The lovebirds visit many places together and love each other’s company, that’s for sure.

Putting his professional career as a sports analyst aside, it’s clear that Jack also values his family life and romantic relationships. He keeps a warm and friendly relationship with his parents and elder siblings and takes time out of his schedule to hang out with them.

Jac is a name of Welsh origin, which means “God is gracious.”