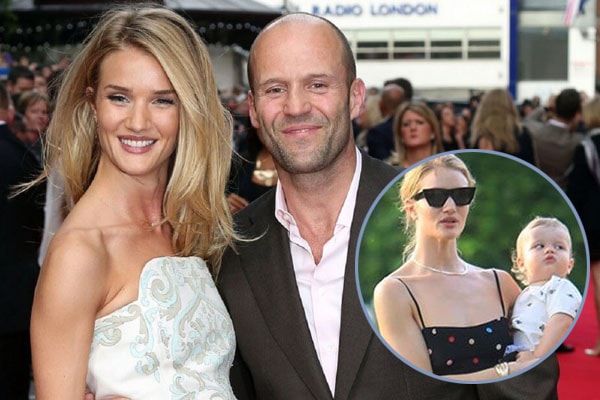 The Mechanic actor Jason Statham‘s son Jack Oscar Statham was born on the 24th of June, 2017. During the birth, the little Jack Oscar weighed 8.8 pounds. Jason had kid Jack with his fiance Rosie Huntington-Whiteley.

Jack Oscar Jackson till date, is the only child of Jason Statham and Rosie Huntington-Whiteley. The couple were delighted to welcome a new tiny member into their small family.

Like many celebrity parents, Jason and Rosie tend to keep their little one away from the media spotlight. They are rarely seen in the public together with their son Jack Oscar. Well, Jason doesn’t upload many personal photos, unless it’s work related. And as for Rosie, her Instagram is filled with her gorgeous pictures, plus at times she also uploads photos of her son Jack Oscar Statham.

But whenever the model Rosie Huntington-Whiteley posts pictures of her son Jack Oscar, she makes sure not to reveal his face.

Despite being all private about Jack Oscar Statham. we all know how paparazzi work. When Jason Statham’s beau Rosie was having a lovely family moment with her son Jack Oscar in Malibu, a paparazzo was successful to record video footage of the two, which was later uploaded on YouTube.

As both Jason and Rosie are trying their best to keep their baby Jack’s life private, we don’t think that the pair were happy about the video.

Jack Oscar Statham Has A Similar Hair As His Mother Rosie

Regardless of trying to keeping Jack Oscar away from the limelight, an Instagram account under the name of “rhwnews” released a bunch of photos of Jack Oscar Statham. And by looking at those, we can see how much similarities the son-mother duo of Jack Oscar Statham and Rosie Huntington-Whiteley has. Jack has inherited the blonde hair of his model mother, Rosie.

The name Jack is a famous English name which means God is gracious. During the Middle Ages, it was used as a general term for a boy or man.

As for the name Oscar, it is also an English baby name which means God’s spear or divine spear.