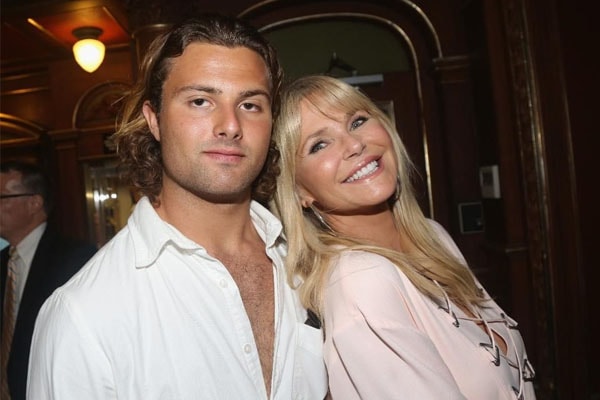 American model, Christie Brinkley‘s son Jack Paris Brinkley Cook was born on the 2nd of June 1995. Christie had Jack together with her ex-husband Richard Taubman. The former couple exchanged wedding vows back in the year 1994. Unfortunately, due to some circumstances, Jack Paris’ parents got divorced in 1995 after a single year of marriage.

Jack has two half-siblings, both sisters. His half-sisters are named Alexa Ray Joel and Sailor Lee Brinkley-Cook. Sailor is the younger sister of Jack, born on the 2nd of July 1998.

Just like his mother Christie and junior half-sister Sailor, Jack is also a model. As mentioned before, he is the son of Christie and Richard Taubman together. His parents got separated soon after his birth. Jack graduated from the Lee Strasberg Theater and Film Institute in New York in 2016. Besides being a model, he is also an actor best known for his role in the movie Hi-Glow Retro.

The model is active on his Instagram handle with almost 27K followers as of November 2019. Going through his IG account, it becomes crystal clear that he loves traveling and spending time with nature.

Christie Brinkley’s 23-year-old son could easily spend his days riding the waves surfing or modeling. But now, he is even a businessman and entrepreneur launching ROVE along with his childhood friend Jake Sosne.

Also, Jack has immense respect towards his god-father Peter Cook and has adopted Peter’s surname as his own. Christie Brinkley’s ex-husband Peter is an architect and professor. The ex-pair got married in the year 1996 and got divorced in 2008.

Luckily, Christie Brinkley’s son is used to having strong women in his life. Jack might be more chiseled than most of the guys around the globe but his model girlfriend, Nina Agdal, easily beats him in the fitness department. The 24-years-old Jack told,

“She(his girlfriend Nina) really could be a personal trainer, She works out at least six days a week. It’s one of her favorite things. She’s definitely more active than I am.”

Not always but most of the time, Jack and his 26-year-old girlfriend Nina spend time with each other in Christie’s Bridgehampton compound.

The two love birds had actually met in July 2017 in Montauk. The adorable couple met through a mutual friend at the Montauk hot-spot Surf Lodge. His mother even knew Nina before he started dating her through modeling in Illustrated Swimsuit Issue.

Jack is a male name of English origin meaning “God is gracious.” Whereas, Paris is a place’s name, the capital of France.