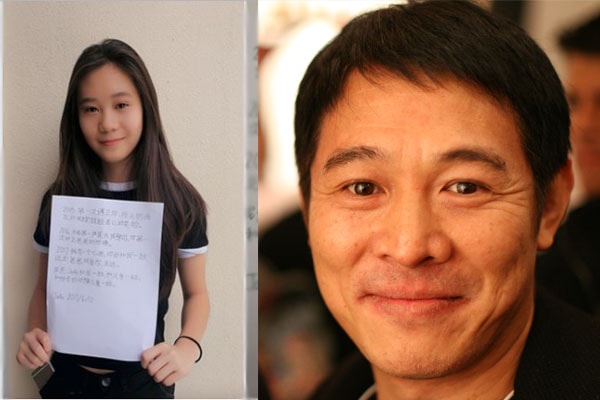 Jet Li‘s daughter Jada Li was born in 2002. Jet had Jada together with his wife Nina Li Chi. Jada’s parents, Jet, and Nina tied their wedding knot back in 1999.

Jada is not the only child of the famous actor Jet Li. She has a sibling sister named Jane Li; and two half-sisters Taimi Li, and Si Li. Si and Taimi were born from Jet Li’s previous relationship with ex-wife Huang Qiuyan. The former couple got married in 1987 and got divorced in 1990.

Jada Is Much Into Charity Work With Her Father

Jada’s father Jet Li is a great philanthropist and a longtime Chinese Red Cross ambassador. The pretty Jada has also inherited her father’s penchant for philanthropy. She has been involved in many charitable works and has also helped in Northern China at the rehabilitation center for hearing-impaired children.

Jada’s father Jet had founded his Shenzhen-based charity organization, One Foundation in 2007. He founded it after he and his family survived a close life-and-death encounter in the Indian Ocean tsunami in 2004 while vacationing in the Maldives.

Fans And Media Gets The Rare Glimpse Of Jada

Jet Li’s daughter Jada Li is not much into the media limelight. However, her father sometimes shares the picture of her with sister Jane on his Instagram account. The adorable family really seems happy and complete together. Also, the beautiful sisters have inherited the beauty of their parents.

Looks like Jada is enjoying her low key life. Besides her charitable work, there is not much information regarding Jada’s lifestyle and love life.

Jada is a female given name of Hebrew origin word “yadha” that provides the meaning of “he knows, the knowing one.” .