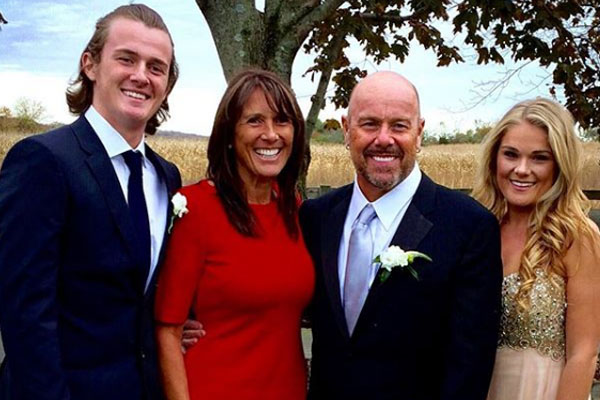 The drummer, Jason Bonham has two children: a son named Jager Bonham and a daughter, Jaz Bonham who was born in 1993. Not many details about Jason Bonham’s children have been shared yet. According to Jason’s twitter, his son Jager was born on October 7, 1996.

Jason Bonham and his wife, Jan Charteris were married on 28 April 1990 and they have undeniably a sweet family relationship between each other. Jaz and Jager have a low appearance on social media except during some occasion with parents.

As of now, Jager is 22 years old, and he is undoubtedly the daddy’s favorite son. He has grown to a handsome guy who is often paid attention from his father. In most of his birthday, you can find his father wishing him a happy birthday. It looks like the father-son share a healthy relationship. It is apparent to the fact of how his family has lived up to without any rumors and bad remarks until now. And when it comes to his father Jason’s birthday, Jager doesn’t miss to wish him back.

Since Jager is from the drummer generations, it is no doubt people would expect him to be the next Bonham’s drummer. But he has a completely different goal than his father. Since young, he has been interested in composing songs by himself. Probably, he is planning to become a singer. You may have noticed or not, but Jason Bonham’s son Jager has some of his music videos released on 2014-15 including songs like Who I’ve become, and Intoxicated. You can also find his songs update on his Facebook page. It looks like he is passionate about music and we are eager to see him doing more.

Jager’s grandfather, Late John Bonham was a famous excessive Zep drummer who died in 1980. His drumming part of legacy was passed down to Jason Bonham, and he is killing it. Would Jager be the next legacy carrier? We aren’t sure.

Jaz Bonham is the only daughter of Jason. She has rarely shared any news about what she is up to now. Going through her twitter, she has mentioned herself as the twin sister of Ashely Bonham, though Jason has the only daughter. And we clearly have no idea who Ashley is. Besides, we also found Jaz being in a relationship with someone whose name hasn’t been mentioned. In the past, she seemed to have a problem with her ex-boyfriend as she had tweeted saying shouldn’t have dated someone who called her fake. She also had mentioned princess Bella, a baby. There is no confirmation if she is Jaz Bonham’s daughter or a relative of hers.

In 2015, Jason Bonham had revealed a bit about his daughter on his Facebook page stating he misses her presence. Jason had also shared a memorable picture of Jaz on her 26th birthday.

Well, this shows how much of a loving bond the father-daughter duo has got.

The name Jaz is used by English people. It usually means the fragrant flower. Jager is originated from German. It’s an occupational name for a hunter.