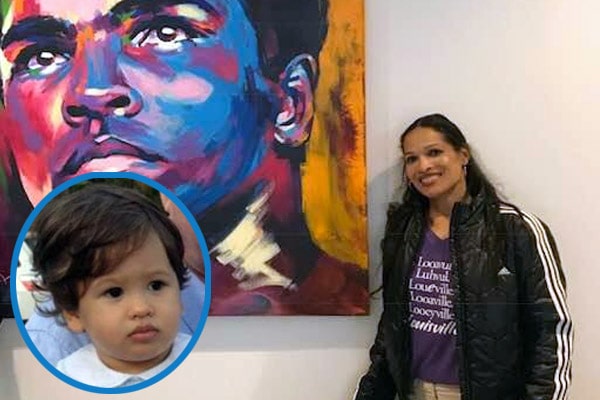 Late boxing legend Muhammad Ali’s daughter Jamillah Ali has established a name on her own in the American Entertainment Industry. Although she is renowned more as the twin daughter of Muhammad Ali, she is famous for her role as an officer in the thriller movie ‘Beyond Desire.’

The twin sister of Rasheda Ali, Jamillah, is the wife of attorney Michael Joyce. The duo is the parents of three children. Today, we are here to make you familiar with the youngest, Jamillah Ali’s son, Jake Joyce. So, please stick with us in this article.

Jamillah Ali’s son, Jake Joyce, was a kindergarten student at St. Cajetan in Chicago in 2017. So, to date, he must have graduated from kindergarten and joined the school. But, it’s hard to say which school he has enrolled in now. Probably his parents Jamillah, and Mike Pickle Joyce aka Michael Joyce, want Jake to live a healthy life away from the paparazzi.

Furthermore, Jamillah and Michael both are not that much active in social media pages. Jake’s mother owns a twitter and Facebook account in her name, but she rarely posts in it. Moreover, it seems like Michael possibly has no social media accounts to his name. Besides, Jake is too young to have any. So, detailed information, as well as photos of Jamillah Ali’s son, Jake, is quite unreachable for now.

The blessed mom and dad of Jake Joyce, Jamillah Ali, and Michael Joyce tied their marital knot on 15 May 2010. And the ceremony took place at The Ritz-Carlton Hotel in Naples, Florida. Jake’s grandpa Muhammad Ali along with one hundred and forty relatives and friends of the couple, attended the wedding of his parents.

Rev. George Clements officiated the marriage of Jake’s mom and dad. Jake’s father, Michael, had asked Jamillah’s father Muhammad for his daughter’s hand while they were on a trip to Ireland.

The graduate of Leo High School, Michael Joyce, is a developer of nationally respected amateur boxing programs. Also, he is a former champion boxer. After retiring as a boxer, Jake’s father worked as a boxing coach for over twenty years and developed dozens of champion boxers.

Apart from being a boxing coach, Jake’s dad Michael aka Mike served as a volunteer football coach as an alumnus of Leo High School. Also, the son of Jeremiah E. Joyce, an influential political figure in Illinois, Michael, is a successful attorney as well as a humanitarian. Moreover, he is the founder of the Chicago Celtic Boxing Club in Mt. Greenwood.

As we mentioned earlier, Jake Joyce is the youngest son of Jamillah Ali with her husband, Michael Joyce. Besides Jake, twin sister of Rasheda Ali, Jamillah has two daughters; Nadia Joyce and Amira Joyce.

Among the three kids, Jamillah Ali’s daughter, Nadia is the eldest one who is attending the University of Notre Dame. Similarly, the second girl, Amira, enrolled at the University of Louisville from which she will graduate in 2021. Both Jake Joyce’s sisters, Amira and Nadia, are active in social media pages with the name Amira Ali and Nadia Ali. But they rarely share their family member’s photos, including their brother Jake.

The boy name Jake is of Hebrew origin, which means ‘Supplanter’.