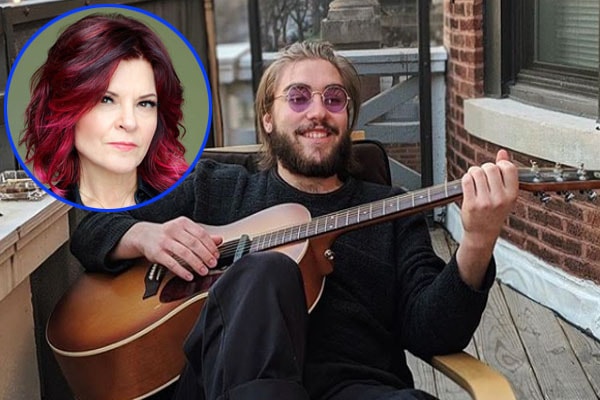 The American singer-songwriter, Rosanne Cash’s son Jakob William Leventhal was born in 1999 with her second husband John Leventhal. Jakob’s father, John is also a great musician. The music runs in his family’s blood which is hopeful to run for long generations. Jakob has also got musical genes like his parents.

As of now, Jakob is 20 years old and from what we have witnessed in his recent works, he seems to have a passion for the music. He has recorded some music albums which probably you will find on his music list. He has got three half-sisters named Caitlin Rivers Crowell, Chelsea Jean Crowell, and Carrie Kathleen Crowell. His mother has also raised Hannah Crowell, Rodney Crowell’s daughter from his previous marriage.

Rosanne Cash’s Son Jakob William Wants To Be A Musician

There is no doubt how Jakob got introduced with the music since he was born to the musician parents. His passion for music certainly bears the carrier of his family’s musical legacy. Though he hasn’t reached that far on a global platform, he has often performed on various places with his popular band who are close as his friends. You can also watch them on their song, “Necktie and Suicides” songs video.

Jakob is the lead singer among his band members. His mama, Rosanne is proud of him for taking such lead in his life as a musician. We wish to see him on the global stage soon.

Jakob has a bright future ahead. Since he has two amazing people, his parents in his life, he has got lots of opportunities to extend his career into the music industry. After the little investigation through his Instagram, there doesn’t seem to be the single day where he has been off from the recording studio. It looks like he is determined in following his dream.

Not only that, he has got some amazing instrumental talents as well. On February 2nd, Jakob William Leventhal and his band had performed in the Chicago and they had sold the tickets for $10. Despite being the son of Rosanne, Jakob rarely appears on social media except during the award shows where he once received the trophy on the behalf of his father.  He seems to stay away from media limelight. However, he broke the media spotlight when he took to his Instagram sharing a picture with his girlfriend.

Yes, people, John Leventhal’s son Jakob is dating and Jakob William Leventhal’s girlfriend’s name is Hana Flamm. It looks like the young couple are madly in love with one another.

Besides being interested in music, Jakob has got a cute niece at home whom he can’t even spare a second to be away from. He seems to be in love with this cute baby.

The name Jakob came from the Greek word. It is traditionally derived from the Latin word “akev” which means “at the heel”. William is a French word meaning will, determination, and resolute protector.