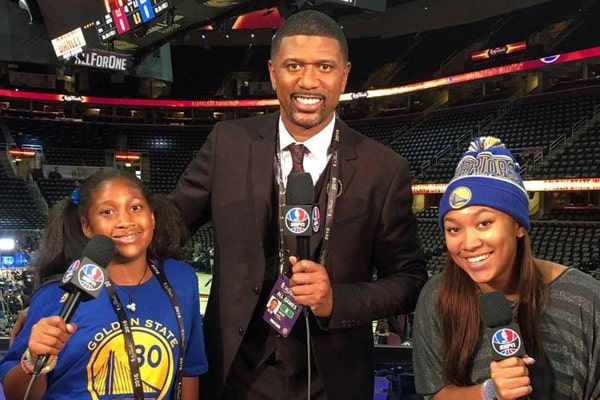 All the avid basketball fans recognize the ESPN sports analyst Jalen Rose well. He has gained huge success and respect from his basketball games. Along with his popularity, a vast mass of his fans is getting interested in his personal life too. Here know about Jalen Rose’s children and his other internal life information.

Jalen Rose is a father of three kids, two daughters, Mariah Christian Rose and Gracie Rose, and a son, LaDarius Rose. It’s often an issue of controversy regarding who is the mother of his kids. So, dig in to find out the reality.

Jalen Rose, as mentioned above, has two daughters and a son. The eldest daughter Mariah Christian Rose was born to Jalen and his ex-partner Mauri Goens on 14 July 2000. It’s good news to Jalen’s diehard fans that his daughter Mariah is active on Instagram. She often uploads her glam photos flaunting her curvaceous body. Moreover, Mariah even shares pictures with her dear momma and siblings.

Here we are clear that Jalen’s one of the daughters Mariah’s mother is his ex-girlfriend Mauri Goens. But the NBA superstar has not disclosed the baby mama of his other two children. Jalen often posts photos with his daughters on his social media pages, whereas his son LaDarius is still out of the spotlight.

Jalen’s youngest daughter, Gracie, is now following the footsteps of her father in sports. She plays volleyball in the premier junior club, A5 Volleyball. Jalen Rose’s daughter Gracie has already won her first championship at a young age. Jalen, the proud papa, expressed his joy and congratulated his little princess via a tweet on 16 January 2017.

Le’s hope to see more of Jalen’s kids in the future.

Rumors of Jalen Rose Being A Married Man In The Past

The happy father of three, Jalen Rose, was once rumored to be a married man. As per some sources, Jalen’s wife was Alexandra Rose and also the mother of his kids. But later, Jalen himself made clear about the controversy with the following tweet.

With Rose’s tweet, he somehow made his fans clear that he was a bachelor till then. Later, in 2016, again, news headlines surfaced in the media regarding Jalen dating his fellow ESPN host, Molly Qerim. This time the media sources were not wrong. He was in a romantic relationship with Molly. Jalen confirmed their affair via a tweet. He had mentioned Qerim as his wifey.

The duo Molly and Jalen walked down the aisle in July 2018. They had a secret small wedding ceremony in NY before taking off for their honeymoon to the Turks and Caicos Island. The love birds shared some beautiful pictures of their marriage on their social accounts.

The Rose Siblings’ Father Filed For Divorce From Molly

The ESPN Analyst Jalen and Molly continued to display love for each other through their respective social media pages after their secret wedding. However, fans started seeing that the couple had stopped sharing about their lives like before. Moreover, Mariah, Gracie, and LaDarius’ stepmom dropped the surname, Rose from her accounts, having previously changed her name to Molly Qerim Rose on all sites.

Sadly, the rumors about the Roses’ separation were true as Jalen reportedly filed for divorce in April 2021. While the news about the divorce only made the headlines in December 2021, Jalen and Molly were separated long before.

Moreover, as per TMZ, Mariah, LaDarius, and Gracie’s dad did not ask for alimony and does not want Molly to have it either. They also do not have a prenup and Qerim has not asked for spousal support to date. Their divorce is said to be amicable and we hope that the former couple continues to be on good terms.

Furthermore, we hope that Jalen Rose will open up more about his children in the upcoming days. And the fans surely would like to know more about his daughters, Mariah, Gracie, and his son LaDarius.