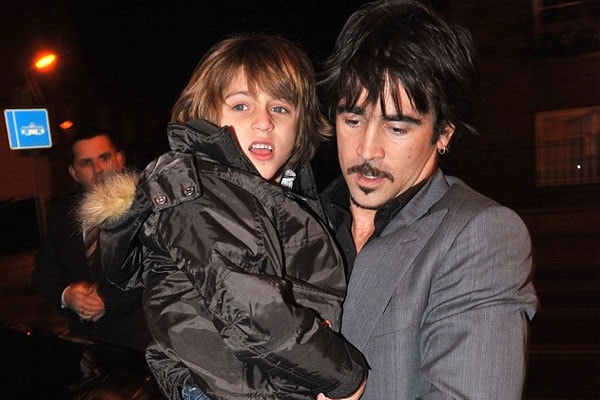 The prominent Irish-Hollywood actor, Colin Farrell‘s son, James Padraig Farrell, was born in 2003 as the eldest child and only son of Colin with former wife, Kim Bordenave. Farell Jr. is the big brother of his half-brother, Henry Tadeusz Farrell, with step-mother, Alicja Bachleda-Curuś.

The proud parents, Colin and Kim, dated for nearly two years; however, the relationship did not result in marriage. Despite having a sour relationship in the past, the former lovebirds are in good terms now for the well being of their son. Coming back to the topic, let’s not waste any further and know more about Colin Farrell’s son, James Padraig Farrell.

Little James was born with a rare genetic disorder called Angelman syndrome, which is a developmental disability. The disorder is characterized by seizures, jerky movements, and sleeping problems. Furthermore, it is often misdiagnosed as autism or cerebral palsy.

James’ dad, Colin opened up about him and his condition in 2007. He also said that the only time he was reminded of James’ genetic disorder was when he was with other kids of his age. Colin has been very honest about parenting and how it changed him.

The first steps of a child are remarkable for every parent, but for Farell and his family, it means something even more. According to father Colin, to be told your child may never take the first step and then see those first steps is just kind of different sport altogether.

The Fantastic Beasts star and the little boy’s mother, Kim Bordenave, share the smallest victories and delight in his small milestones; the first words at age six, being able to feed oneself, and getting seizures under control. So, in all James’ parents are doing everything they can just to see him happy.

The first son of Colin from his relationship with the model, Kim Bordenave, James, is the half-sibling of young Henry Tadeusz Farrell. Despite having different blood running through their veins, the brothers share a strong bond, and their relationship is admirable. Furthermore, father Colin leaves no chance to treat his sons like royalty.

According to father Farrell, he likes to give his kids the experiences and things that he never had the privilege of when Colin was their age. The blissful family is often out on adventures and love being with one another.

The beautiful name “James” is a classic name for a baby boy. The English form of Late Latin name “Lacomus,” which was from  Ιακωβος (Iakobos). The wonderful name also derives from the famous Hebrew name “Jacob.” The distinct meaning of the name is “supplanter” or “the one who follows.” Besides that, the name “James” is also in the Bible as the brother of Jesus.