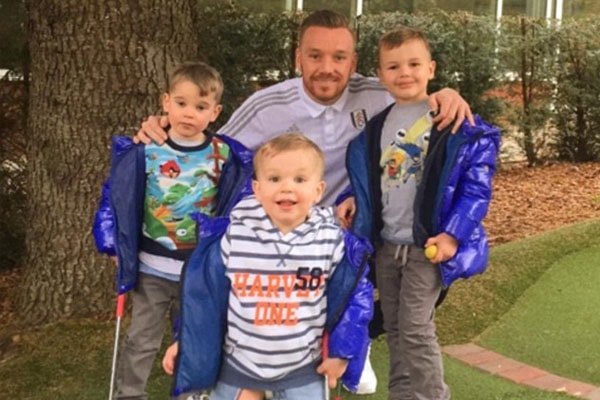 However, the former couple settled their differences and got divorced in 2014 just after 2 years of marriage.

Let us glance at the profile of all 3 Jamie O’Hara’s children each:

Archie O’Hara Is The Eldest Son Of Jamie O’Hara

Jamie O’Hara’s son Archie O’Hara was born on 12th of July 2010 at the Portland Hospital, in London.  The soccer player was the happiest father when his first son Archie was born.

Back in September 2017, there was quite a quarrel between Danielle Lloyd and her former husband Jamie. According to the Mirror, Jamie had demanded access to his three children including Archie after their divorce in 2014. Also, Jamie took the matter to Twitter, begging his ex to let him see his three sons without going back to court.

Great 1-0 win today for our first game of season, loads of improvement needed but a clean sheet I’ll take all day, very good Eastbourne side too, thanks everyone for coming, we’re off the mark 💪🏼 @BTFC pic.twitter.com/j1ZIYBEEIC

Not only that but, Jamie’s ex had claimed that it would fear over their son Archie’s mental health and is causing the apparent breakdown in communication.

Jamie O’Hara’s middle son Harry James O’Hara was born on September 2011. Harry’s birth was quite busted out in the news as he was born 10 weeks prior to his estimated birth. Hence, premature Harry was moved to a special neonatal unit.

All the football(soccer) fans including Jamie and his ex-wife Danielle Lloyd’s prayer worked for the baby Harry as the matter turned into positive and later his health build-up gradually. Harry’s parents were also grateful to the doctors who handled the situation extremely well.

George O’Hara Is The Youngest In The Family

George O’Hara is the youngest son of English footballer Jamie O’Hara who was born in 2013. However, George O’Hara also has a younger half-sibling named Baby O’Neill who was born from Danielle Lloyd together with her current partner Michael O’Neil.

There is not much information regarding George out in the media. It seems as if his details have been kept hidden from the public media.

Archie O’Hara: Archie is an ancient Teutonic name which gives the meaning of “truly brave”.

Harry James O’Hara: Harry is a medieval name, a form of Henry which gives the meaning of “home power or ruler”. Whereas James is a classic boy’s name of Hebrew origin which means “supplanter-one who follows”.

George O’Hara: George is a universal name of Greek origin which gives the meaning “tiller of the soil, or farmer”.