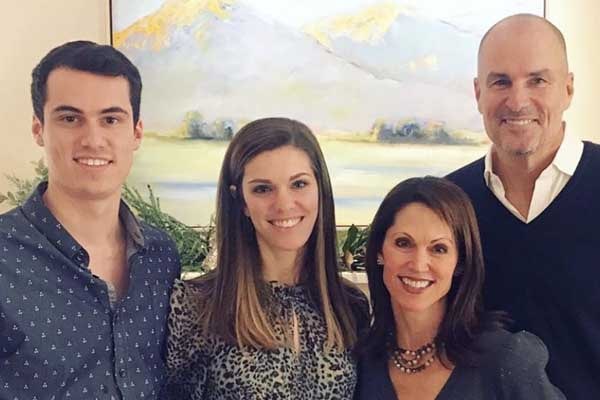 Jay Bilas is a former basketball player who is currently living a comfortable life with his wife and two kids. Image Source: Jay's Twitter.

Born as Jay Scot Bilas, Jay is an American college basketball analyst currently working for ESPN. He is also a former Basketball player and coach. Jay is currently sharing his marital life with his better-half Wendy Bilas since 22 August 1992. Together the couple has two children, a son, and a daughter.

Tori Bilas was the weird horse girl in middle school who never grew out of it. Her passions are animals and art. She has worked hard to create such a life that seamlessly integrates her passions. And now, she resides in Lexington, KY, where she fills her days with horses and spends the remainder of her time creating custom art.⁣

Jay Bilas’ daughter Tori Bilas is really talented when it comes to sketches. She has an Instagram account solely dedicated to her arts. And that’s not it, Tori has her own website where she showcases her photographic and artistic talents.

My incredible daughter, Tori. Sadly, her mother had nothing to do with her talent. It was all The Bilastrator. https://t.co/KWMrAl1jeV

Tori says the best part of being an artist is the reaction from the customers when they receive the piece that showcases the special animal, human, or item they love most. ⁣She is not only a fabulous artist but also an excellent horse rider at USHJA.

How Is her Relationship With Her Parents?

Speaking of her relationship with her parents and younger brother, Tori Bilas is an adorable daughter and a caring sister. She is daddy’s little girl. Plus, Jay loves messing with his daughter, and he has proven that time and again. Messing with his daughter’s Emmy and uploading it on his Instagram shows that.

Like father, like son, this saying is as old as it gets, but it’s absolutely right. Anthony is just like his old man; he is also a basketball player or was a basketball player as he recently ended his career. He played basketball while he was studying at Wake Forest University. Anthony showed his gratitude by uploading a photo of him in his basketball jersey and thanked his school for letting him represent them. He said it was his honor playing for his university.

At his graduation, both of his parents and elder sister were present celebrating his milestone. Their photo together shows how much it means to be together. The Bilas family was so joyful at the event, and looking at the picture, and we could clearly see where Anthony’s good looks came from. If you haven’t got a slightest of an idea, then let’s make that clear that he has inherited his father’s good look. If you have seen old photos of Jay, then it’ll be obvious.

Jay Bilas’ son Anthony Bilas is a young lad and has a whole life ahead of him. So, we can’t clearly say what’s he going to do or what he will become. But from seeing his track record, we can assume he is going to be as successful as his old man.