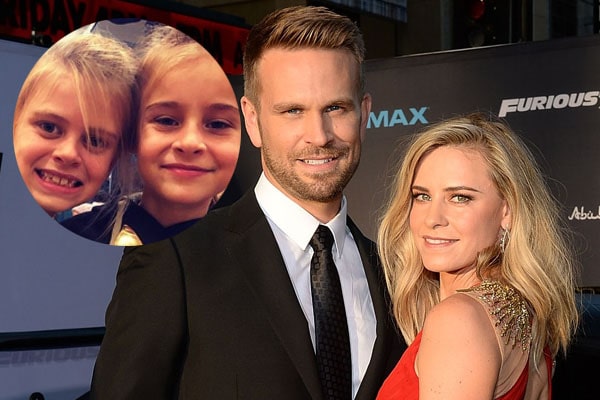 John Brotherton and Alison Raimondi, two well-celebrated actors, tied their wedding knot back on June 7, 2008. They welcomed their first child, a daughter, Shia Bellatrix Brotherton, on September 25, 2010, whereas their second daughter Saylor Callisto Brotherton was born on March 3, 2012.

John Brotherton’s daughters Saylor Callisto Brotherton and Shia Bellatrix Brotherton, both are his little angels. Despite having such a tight schedule, dad John tries to spend as much time as possible with his two princesses. They go on daddy-daughter dates and like spending time doing fun things. So, fasten your seatbelts and get to know more about the two rockstar daughters of John.

Everyone knows John Brotherton and his bold nature. He loves having fun, and it’s a plus point when you have daughters equally fun-loving like you. So, it’s no surprise that the daddy-daughters trio are seen doing things out of the box. They like skiing, fishing, and traveling. Furthermore, they also attended the premiere of the Lego movie, where the dynamic Brotherton family looked great together.

Furthermore, John Brotherton’s daughters love reading books. He even once shared a picture of his daughters with their new favorite author Candace Cameron-Bure. It was a convention of CaNDace CeNTeR StAGe. Talking about his daughters, they seemed particularly happy that day.

There is nothing more important than one’s children. And the girls’ mom Alison has proven to be correct. She has not appeared in a single movie since 2014. Saylor and Shia’s mother was last featured in the House at the End of the Drive, which was released in 2014. Maybe she is just busy raising her two gorgeous daughters. We can only speculate that she has raised her two daughters to become as novel as she is.

Moreover, the family of four can be spotted spending time traveling to new places and enjoying life to the fullest. Daddy John likes to describe his family as his umbrella because whenever the clouds seem to be heavy, he is under the shade of his loved ones.

John and his wife, Alison are really proud parents. They say their two daughters are perfect in every way. John’s daughters are not only gentle but also sweet. They respect people who are elder than them and love the ones who are younger. Nonetheless, John Brotherton’s children Saylor Callisto Brotherton and Shia Bellatrix Brotherton, are also really good at sport. He shared a picture of his daughters holding trophies and mentioned that he was really proud of the way they played and showed the spirit of an athlete.

Furthermore, father John never forgets his little angels’ birthdays and often shares pictures with them, wishing them a happy birthday.

Alison Raimondi’s daughter Saylor Callisto Brotherton’s first name is of German origin and is related to the word seil, meaning rope. Whereas her middle name Callisto is of Greek origin, meaning Most Beautiful.

As for her second daughter Shia Bellatrix Brotherton, her first name is of  Hebrew origin, meaning praise god. Whereas her middle name Bellatrix is of Latin origin and is the feminine form of Bellator, meaning warrior.