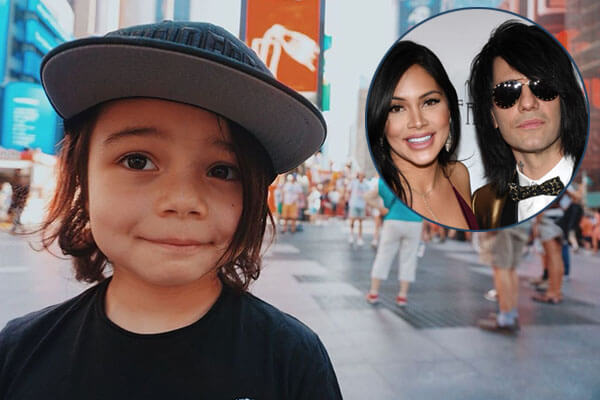 Shaunyl Benson and Criss Angel‘s son Johnny Crisstopher Sarantakos is a super adorable child of his parents. Johnny’s birthday is on February 16, and he was born in the year 2014. He has a younger brother named Xristos Yanni Sarantakos. Further, Johnny went through chemotherapy to treat his cancer and is now healthy.

The ex-couple, who got married in 2015 and divorced in 2016, share two children. Johnny and his sibling Xristos are their parents’ light of life. A magician and illusionist by profession, Criss spends as much time with his boys as possible. And when she’s not writing songs, Shaunyl takes care of her sons as a good mother.

It’s official! Criss Angel’s children are the sweetest, and his son Johnny Crisstopher is the cherry on top of the cuteness cake. Not many know that baby Johnny was born with cancer. The type of cancer was leukemia, which affects the blood and bone marrow. After undergoing three years of chemotherapy treatment, Johnny is now cancer-free.

Hearing the good news about their son’s health, Criss and Shaunyl are happier than ever. Likewise, Daddy Criss doesn’t miss the chance to share little Johnny’s photos and prove to the world that his son is indeed the cutest. Judging by Criss’ Instagram pictures, the father-son duo isn’t afraid to flex their wealth!

Furthermore, it seems that Johnny Crisstopher enjoys spending time with mommy too. As daddy Criss is busy shocking people with his magic, Junior Criss doesn’t see his father as much. However, that is changing, as Criss often takes breaks from his career to focus on his children’s future. Not only that, but he also takes Johnny and Xristos to his stage shows!

Also, we are sure that Johnny is loving life in the comfortable shadow of his parents. He bonds well his brother Xristos Yanni. And, it’s Johnny Crisstopher’s school-going age, now that he’s five years old. Good luck at school, Johnny! Study well.

The name Johnny comes from the Middle Latin “Johannes,” which means “Jehovah is gracious.” Crisstopher is a variation of “Christopher,” meaning “bearer of Christ.”