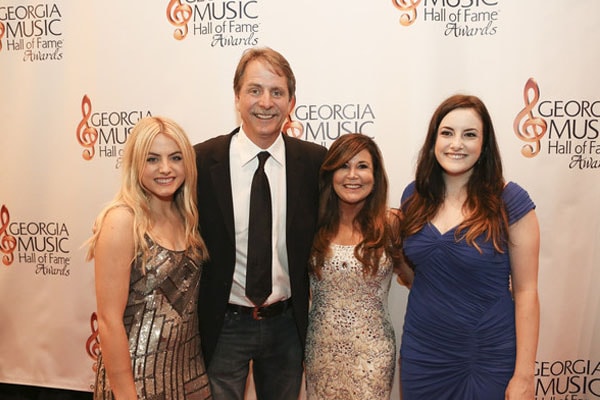 The American comedian and personality, Jeff Foxworthy is one of the biggest comedians of his generation and a hugely respected member of his community. He is best known for hosting his own sitcom show called The Jeff Foxworthy Show and releasing multiple comedy albums. Along with his music career, Jeff Foxworthy is also a married man and has two daughters: Jordan Foxworthy and Juliane Foxworthy.

Jeff is married to Pamela Gregg as the two met at the punchline in Atlanta, Georgia, and later got married on September 18, 1985. Their first daughter Jordan Foxworthy was born in 1992, and the couple followed it up by giving birth to their second daughter Juliane Foxworthy two years later in 1994, completing their family in the process.

Jeff shares an intimate relationship with his daughters, and they mean a lot to him. Despite his daughters growing up and standing up on their own, he cares for his little girls and is always protective of them. But his daughters are all grown up now and stand on their own two feet but still love their father a lot.

Jordan Foxworthy Is The Elder Daughter

Born in November 1992, Jordan Foxworthy is Jeff Foxworthy’s daughter with his wife, Pamela Gregg. She is known to be active in various kinds of social works. Jeff mentioned that she went to Kenya to work in AIDS orphanages when she was just 10-years-old. She also sold cupcakes to buy mosquito nets to protect people in Africa from malaria.

Jeff loves his eldest daughter a lot, and he makes it clear all the time in interviews. It was pretty visible when Jordan went away from her family as she had to join college. Jeff mentioned in an interview that she is an amazing girl, and he’ll miss her a lot, showing his love for her.

Going through Jordan’s Instagram profile, she frequently updates her Instagram with awesome photos of her family and friends. She defined herself as a film nerd on Insta bio and loves to travel as well. As a celebrity kid, Jordan has met famous celebrities like Elton John, Chrissy Teigan, and Kenan Thompson.

As for her love affairs and relationship status, she seems to be very single at the moment. Perhaps she is still waiting for the man of her dreams.

Jeff’s second and youngest daughter Juliane Foxworthy was born two years after her elder sister in March 1994. During the 2006 Country Music Awards, which Jeff was hosting, Jeff performed the special dance with the crew of “Dancing With The Stars,” which left his daughters mortified.

The 26-year-old Juliane has all grown up and is a married woman. She married her other half, Brendan Corley in 2018. The lovely couple is so much happy with their married life.

But Juliana and her husband, Brendan, are very private when it comes to social media. They both have private Instagram and are not willing to share with the public. Jeff’s daughter, Juliana also has her own website called ‘Appetizing Adventures’ and loves sharing recipes and blogs of delicious dishes and foods.

Jordan Foxworthy – The name Jordan came from the Hebrew name ‘Yarden,’ meaning ‘one who descends’ or ‘to flow down.’

Juliana Foxworthy – Juliana is a Latin name that refers to ‘youthful.’