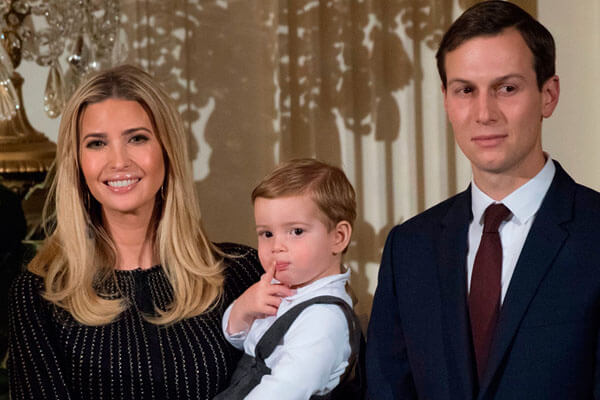 Ivanka Trump‘s son, Joseph Frederick Kushner, was born on October 14, 2013. He is the middle child of Ivanka and her husband, Jared Kushner. The couple has three children altogether, the others being their daughter Arabella Rose Kushner and son Theodore James Kushner. Joseph’s parents are tied the knot 2009 on October 25, 2009, and are enjoying a successful marital life.

Joseph is one of Donald Trump‘s six grandchildren. Through his uncle Donald Trump Jr., Joseph has three cousins named Kai Madison Trump, Donald Trump III, and Spencer Frederick Trump. At the moment, the 5-year-old Joseph likely attends school and lives luxuriously in Washington D.C. with his father, mother, and siblings.

Like his siblings. Ivanka Trump and Jared Kushner’s son Joseph Frederick Kushner is growing up healthy. As a middle child, Joseph has an elder sister, Arabella, as well as a younger brother, Theodore. The family of five has been living a comfortable life so far. Joseph’s mother, Ivanka, is a former model turned entrepreneur, whereas daddy Jared is a real estate developer.

Moreover, Ivanka is also an advisor to her father Donald Trump, who currently serves as the President of the United States. Likewise, grandpa Donald is also fond of his grandson, Joseph. The two often hang out in the White House.

As of now, Joseph is also of school-going age. He likely attends a Jewish day school along with his sister, Arabella. Along with his parents and siblings, Joseph moved to the D.C. area to a 7,000 square-foot home in 2017. As a result, his parents are reportedly looking for a spacious place to accommodate their growing needs.

Further, the parents of three, Ivanka and Jared, understand their kids’ need for privacy. They are undoubtedly making efforts to protect their children from too much exposure to the media limelight. Moving towards Joseph Frederick’s future, he might continue his parents’ legacy of being successful entrepreneurs.

The name Joseph is a variation of the Greek “Ioseph,” which means “he will add.” Frederick is a masculine name, meaning “peaceful ruler.”