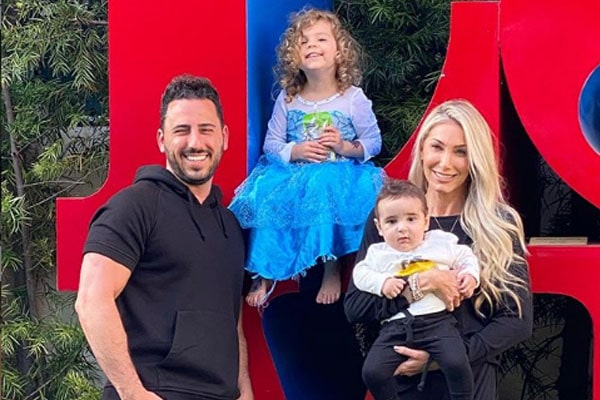 The American real estate agent, investor, and reality television personality, Josh Altman, is the father of two adorable children with his wife, Heather Altman. The lovely married couple has a son and a daughter, and they are Ace David Altman and Alexis Kerry Altman.

Josh and his wife, Heather, are very blessed that their children always cherish the family’s happiness and enjoyment. The small and lovely family has shown that there’s no boundary to the family’s delight and glee. So, let’s get to know more about Josh Altman’s children with his beautiful wife, Heather Altman.

Born on April 3, 2017, Alexis Kerry is Josh Altman’s first child with his wife, Heather Altman. She came into the world, weighing in at 7 lbs and bringing out loads of happiness in the love birds’ life. Alexis is very lucky to be the daughter of such loving and caring parents. She also has a small brother named Ace David Altman.

As time flies, the 3-year-old Alexis is gradually growing up to become a beautiful person. The little girl is very much enjoying her splendid and lavish life while her daddy’s sealing on million-dollar deals. If you scroll through Josh Altman’s Instagram Profile, you can see the father-daughter duo enjoying a lot, and at times you can even see Alexis riding a bicycle and Josh, hopping on a superbike.

Recently, the Altman family celebrated Alexis’s 3rd birthday. Although they had planned to go to Disneyland for the first time for her birthday that didn’t work out because of the coronavirus quarantine. However, the celebration at home turned out to be absolutely perfect, and she had the best time ever.

Alexis’ smile flourishes out Josh and Heather’s grin. There have been all sorts of cuteness going on with the Altman family. From family outings to her first luxury car experience. Probably Alexis’ parents are fulfilling everything for her so that they get to see the precious smile on her face. Therefore, we can see that Josh Altman’s daughter Alexis Kerry is out there living a wonderful and splendid life with her family.

Josh Altman’s son with his wife Heather Altman, is Ace David Altman and was born on July 16, 2019. Well, Ace David resembles much more to his dad and is the mini version of Josh Altman. The dad-son duo looks so adorable together. As the youngest member of the Altman family, Ace David is being loved and getting attention from his parents all the time.

Since Josh Altman has a staggering net worth of $30 million, we can definitely say that Ace David’s life is full of lavishes and luxuries. His parents haven’t left any mark to make adorable Ace David happy. Similarly, Heather Altman frequently posts photos and snaps of him on Instagram just to keep her fans updated.

Hence, Josh Altman is a happy father of two adorable children and loves them more than anything in the world. Josh and Heather are probably going to be the ideal parents to Alexis and Ace.

Ace David Altman – Ace is an English baby name meaning unity, a nickname given to one who excels. Similarly. David originated from the Hebrew name (Dawid), meaning ‘beloved.’