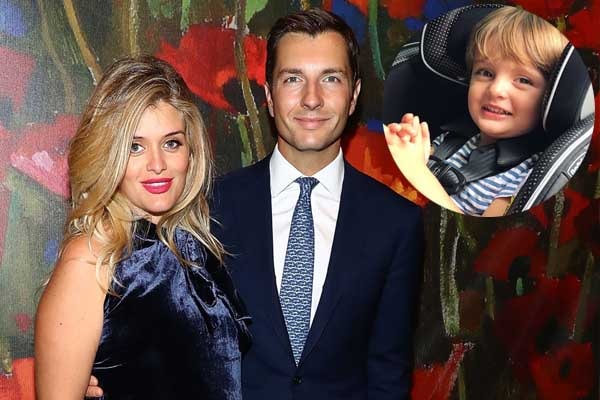 The pair welcomed their first-child Philomena on February 26, 2014, followed by the birth of Jovan Jovanovic Jr. on October 21, 2015. The couple further added two daughters named Domenica and Giovanna on December 4, 2017, and August 14, 2019, respectively.

Daphne and John have only one son Jovan who weighed eight pounds and six ounces at the time of his birth. Also, Did you know he was named after John’s dad?  He is as charming as his father and is quite adventurous. That being said, let’s know more about him.

Many people wish they were young again why is that. Maybe they just want to relive the moments of their childhood or maybe they want to do something they weren’t able to do. Whatever the reason, childhood is that time where your mistakes were overlooked and your parents had your back. Those were some innocent moments of our lives. Anything and everything was possible when you are a kid. Similar to that, Daphne Oz’s son Jovan Jovanovic Jr. is currently living the moments of his life as a kid, enjoying his life while he is young.

Like every kid, Jovan too wants to become someone new every day. One day he wants to become a tennis player and another day an astronaut. Well, life’s good and he is enjoying it to his fullest, playing with his sisters, swimming with dad and getting ice-cream from mom. What more could a five-year-old ask, he has everything he wants, a loving mother, a caring father and three gorgeous sisters to play with.

Well, it’s not a new thing that parents are loving and caring. They make our childhood so much better. Jovan’s parents are also caring and loving, his father spends as much time as possible with him and often the father-son duo can be seen swimming or playing golf together. While swimming, his father launches him like a rocket which he adores. As mentioned above little Jovan is really fond of astronauts, he even dresses up like one and his favorite cartoon character is Buzz from the Toy Story.

Speaking of his and his mother Daphne’s relationship, they have something special going on. Though having tons of kids might be difficult, Daphne is doing just fine. She has time for all of her children, and Daphne says there are so many things about motherhood that break your heart in the best and worst ways possible. Like the time her son sang her mother’s day song which obviously made her cry.

Growing up in a family where you have kids of your own age is something special. You always have a friend to play with and it’s the same case scenario with Daphne Oz’s son Jovan Jovanovic Jr. He too has his sibling sisters to enjoy with. His mother takes them to beaches where the brother-sister duo can be seen making a sandcastle and later enjoying some ice-cream with mom.

Furthermore, the Jovanovic kids can be seen enjoying time with parents Daphne and John in Disney Land, on holidays and vacations. The Jovanovic family just loves spending some quality time with one another.