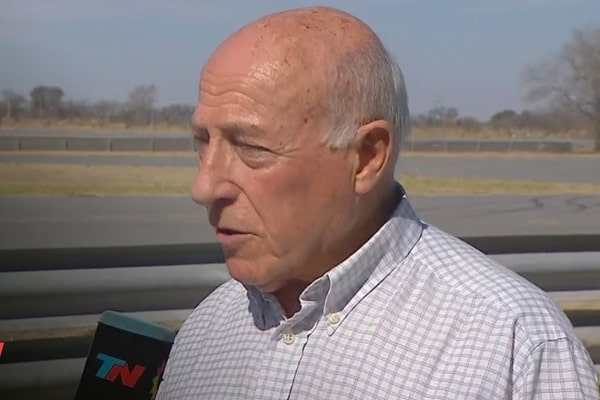 Once a person dies, several secrets die with him except his legacies and children. Such is the case with the race ace, Juan Manuel Fangio. Juan created history and is regarded as the greatest in generations that followed. His five World Championship titles stood for more than four decades until German race tycoon, Michael Schumacher, surpassed it in  2003.

Even then, Schumacher refused to be compared to a personality like Fangio and emphasized his legacy telling his achievements were unique. However, Fangio’s life was surrounded by mystery. Decades after his demise, he was taken out of his grave to prove a claim of Oscar Cacho Espinosa of being his son.

Hence, we shall be talking about Juan Manuel Fangio’s son, Oscar, and his crazy journey.

Juan Manuel Fangio’s son, Oscar, was also a racer. Born on April 6, 1938, Oscar Cacho Espinosa followed his father’s footsteps, who interestingly never married. It looks like he started his racing career in 1966 and ended his career in 1989 with no remarkable achievements as his father, who is regarded as ‘the Godfather of Racing sports.’

In an interview with Infobae, Fangio’s son revealed that he was always close to race tracks and traveled with him until his mother completely cut ties with him. Furthermore, Juan competed close to his first-born but did not recognize him.

Unfortunately, Oscar mentioned that his ‘old man’ wanted him to be a doctor, but he pursued racing. He raced in some minor categories until in a Grand Prix. He participated in the Renault Gordini team, where he ran for two years.

Unlike Oscar Espinosa’s father, Juan, he seems to prioritize his family a lot and hence, retired from his racing career to remain close to his family. While talking to Infobae, after achieving his goal of being in the top 5 in the competitions he starred in, he had to choose between living in Buenos Aires away from family or stay home.

Oscar chose his family as establishing family was one of his main achievements and dreamt as a young man. Hence, it was not a hard choice.

Espinosa further talked about how he missed seeing his daughter walk during his tours in Europe and America. Furthermore, he reminisces how he missed the best period of his children but is equally thankful for being a part of their high school years.

And currently, Oscar seemed fulfilled to have dedicated his life to his family instead of cars. Additionally, he regards his grandchildren as great rewards of the sacrifice. Heartwarming!

Grew Up With Mother

Aforementioned, Oscar vividly remembers his memories with his father, but he mostly grew up with his mother. He grew up with the family of his mother’s first marriage. He lived in Mar del Plata after finishing high school and began to share things with his biological father, Juan Fangio.

Oscar acknowledged how his father wanted him to be a doctor and ‘did not want him to run.’ But he adapted to his biological father’s passion for karting and began minor racing.

As of now, Fiango’s son is living a grounded life, married, Norma, and welcomed three daughters together. Oscar Caho Espinosa prefers his life away from the media. Hence, he is living secluded life from media scrutiny. Let’s hope to hear more of him in the future.

Aforementioned, Oscar went a lengthy process to be recognized as F1’s legendary racer, Juan Manuel Fangio’s son. He filed for the paternity case in 2013, which led to the exemption of Juan’s body to obtain the DNA.

The exemption was authorized by the head of the Civil and Commercial Court no.5 of Mar del Plata in charge of Dr. Rodrigo Cataldo. Likewise, further analysis in the Judicial Mourge began in 2013 but was refused by the representatives of the Fangio Foundation.

However, in 2015 the DNA test ordered by an Argentine judge, Rodrigo determined that Espinosa is 99.99%, Fangio’s child from an affair he had more than five decades ago.

All the confusion created because the racing ace, Juan, was unmarried and was thought to be childless. Interestingly, he had a long-term relationship with Andrea Berruet, presumably, Espinosa’s mother.

A similar claim as Oscar’s brought another twist in the story. Let’s discuss that below.

It looks like Juan made a couple of children to keep his legacy but kept them secret. However, the secret is an oblivion concept, and hence Juan Fangio’s sons never gave up on finding their father.

Alike, Oscar Espinoza, Rubén Vázquez claimed that his late mother, Catalina Basili confessed that he too was Fangio’s son. The former pair welcomed him during their flaming relationship in the 40s.

Furthermore, the DNA test carried out for the legitimacy of him also came out positive. Hence, it was proven, Juan Fangio has two sons.

It is pretty overwhelming to find ones’ siblings after sixty years on earth, but the Fangio siblings came in contact and worked on building their relationship.

Interestingly, both Oscar and Ruben named one of their daughter ‘Caroline’ and has a grandson named ‘Ramiro.’ The gene strikes here!

Moreover, Oscar admits that Ruben has the closest resemblance to their late father. Anywhoo, the siblings are pleased to have met and shared their remaining life as a family.

Although Oscar chose his family over karting and prefers a low-key life, let’s hope to see more of him in the future.

The name Oscar means “God spear, or deer-lover or champion warrior and has Irish origin.