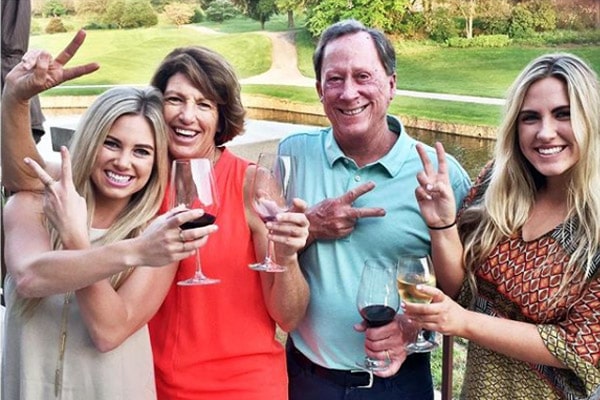 Juli Inkster, born Juli Simpson, is one of the talented American sports personalities. She is an American professional golf player who plays on the Ladies Professional Golf Association (LPGA) Tour. Inkster joined the LPGA Tour in 1983 and won her first title only in her fifth event, the SAFECO Classic. Her almost half a century career in the golf course has earned her numerous wins in various matches. Juli is the only golfer in LPGA history to win two majors in a decade for three consecutive decades.

Apart from gaining massive success in her profession, Juli Inkster is equally successful in her family life too. Inkster married a golf instructor, Brian Inkster, in 1980, and her marriage with Brian is going well, leaving no marks of marital issues behind. Juli is a mother to two beautiful daughters with her husband, Brian. Here, in this article, know everything you need to learn about Juli Inkster’s daughters, Hayley Carole Inkster and Cori Inkster.

The LPGA Hall of Famer, Juli Inkster, may have turned sixty in 2020, but she does not feel like it and is not playing like it. She always feels young and gives credit to her two gorgeous little princesses, whom she shares with her husband, Brian Inkster.

Juli welcomed her first child, daughter Hayley Inkster in 1990. She kept a gap of four years after giving birth to Hayley so that she could continue her profession along with raising her first child together. In 1994, the outstanding women golf performer, Juli, gave birth to her second daughter, Cori Inkster.

Growing up, the oldest daughter of Juli, Hayley, graduated from Santa Clara. Currently, she works at a software company in Palo Alto. Likewise, Hayley also works for SurveyMonkey as a Senior Audience Relationship Manager. Before this, she served in the same company as a Sales Engineer, Financial Services Global Account Manager, and an Account Manager.

Furthermore, talking about the educational qualification of Juli Inkster’s second daughter, Cori, she graduated from Villanova University in Philadelphia. Like her big sister, Cori also works for SurveyMonkey. Due to Corona Pandemic, she works from her one-bedroom apartment on the seventh floor in Dublin, maintaining social distance.

Juli Inkster’s daughters grew up, appreciating their mom’s profession, and traveling along with her whenever possible. Their momma, Juli, used to take them in several tournaments around the globe during their childhood. In the present also, the Inkster family travels various destinations on their weekends and vacations. Juli and her grown-up daughters never forget to share their happy moments on their respective social media pages.

Both Daughters Of Juli Are In A Relationship

The charming daughters of Juli Inkster, Hayley and Cori are independent ladies in the present. Currently, Hayley is in her thirties, whereas Cori is twenty-six years old. And both of them are dating their respective beaus.

The first-born of Juli, Hayley, is in a romantic relationship with Harrison Chase. She uploads photos with her boyfriend, Harrison, regularly on her Instagram, which has over 2K followers as of now. Hayley’s boyfriend seems to be very close with her parents, too, as they are often pictured traveling and having fun moments together.

Similarly, Juli’s youngest girl, Core Inkster, is engaged to her long-time boyfriend, Correy Long. Correy proposed his love Cori with an engagement ring on 13 August 2020 while they were on a hike to Glacier National Park, Montana. Cori’s sister, Hayley, and the over-whelmed momma, Juli, announced their engagement via their Instagram page.

Both daughters of Juli Inkster with Brian Inkster have a great bonding with their parents. Although they have already chosen their soulmates and living far from their mom and dad, they manage their time to meet them.

The name Hayley is from the old English origin Haley, and the compound of heg meaning “hay” and leah meaning “clearing or meadow”. Similarly, the name Cori means maiden.