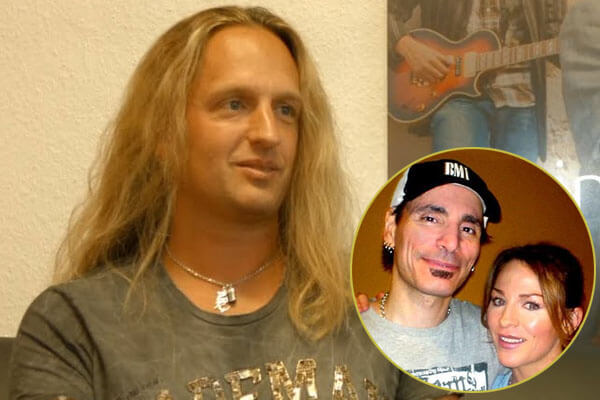 American singer and guitarist Steve Vai‘s son Julian Angel Vai was born on March 1, 1989, in Encino, Los Angeles, California. Julian was born to Steve’s wife, Pia Maiocco. He is the couple’s first child together. Julian’s parents are married since 1988, and they seem to be enjoying a successful marital relationship.

With his interest in music and playing the guitar, Steve Vai and Pia Maiocco’s eldest son Julian Angel is making his parents proud. As of now, young and talented Julian Angel does background vocals and sometimes often uploads music to his Discogs profile.

The father-son duo of Steve Vai and Julian Angel Vai also share a great bond. And Steve never misses to wish his sons Julian Angel and Fire their birthdays.

March 1st marks the birthday of Julian and Fire Vai. They were born on the same day, 3 years and 3 hours apart. Today they are 27 (Fire) and 30 (Julian). For myself and Pia, they are the most amazing and lovely things that walk the planet. pic.twitter.com/9C0aoBlieL

In the tweet, fans of Steve’s music also chime in to congratulate the guitar pro’s adorable sons. Steve and his wife Pia are lucky to have two loving children. Likewise, Fire Vai loves to hang out with his elder brother, Julian.

Julian Angel Vai’s Instagram bio says that he is a “dog walker”, he has given a link to the website Rover. As we know, Rover is a website that offers professional dog walking service. Indeed, Julian Angel has chosen a hobby and made it his profession. On his Rover profile, Julian says that he will walk dogs of any breed around the neighborhood of Valley Village, California.

Further, according to his dog walking profile, Julian is a 5-star dog walker, with over 124 reviewers claiming that he’s the best dog walker in town. For house sitting a dog, Julian charges $70 per night, and for drop-in visits, he charges $24 per visit, as well as $24 for 30-minute walks per dog. As such, we can see that Julian makes quite a bit of pocket money with his service. Instead of chasing the media limelight with flashy professions, Julian loves to live a low key and is happy walking dogs.

Julian is a Latin baby name, meaning “youthful”. Angel is a name of Greek origin, which means “divine messenger or messenger of God.”