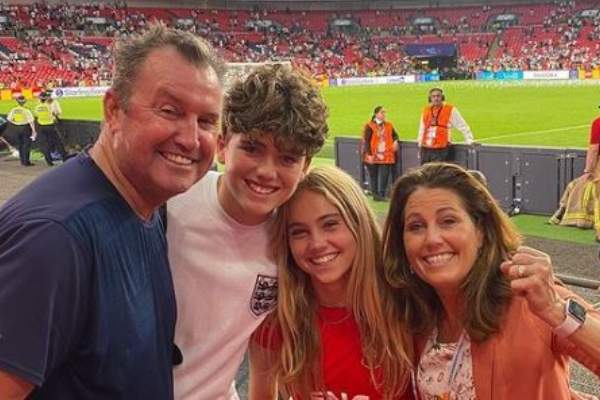 Julie Foudy is a renowned name in the women’s soccer sport. The retired soccer midfielder is a two-time FIFA Women’s World Cup champion and has also bagged Olympic gold medal twice. In 1998, she was honored with the FIFA Fair Play Award, and she was the first American and first woman to do so. Currently, she is an analyst, reporter, and the primary color commentator on ESPN.

Besides being a soccer personality, Julie is a proud mother of two kids, whom she shares with her loving husband. The babies are growing up, and many people are curious to know about them. So, in this article, let’s learn in detail about Julie Foudy’s children with her hubby, Ian Sawyers.

As already mentioned, the retired soccer athlete is happily married to Ian Sawyers. The duo tied the knot in 1995 and have been together ever since. It has been over two decades since their marriage, and the pair are living a happy life with their two kids.

Julie Foudy’s daughter, Isabel Ann Sawyers, is the eldest among her kids, whom she gave birth to on January 1, 2007. Then, in December 2008, their son Declan Sawyers arrived. Furthermore, Isabel’s nickname is Izzy.

The Sawyers siblings are close with one another. Furthermore, as they have almost two years of age difference, they must have grown up having a wonderful time. So now, let’s learn further about what the siblings are doing.

The Sawyers family is a lovely family of four, comprising Ian, Julie, Isabel, and Declan. Julie Foudy’s children are growing up with immense love and pampering. To talk about their education, they are currently school students.

Julie Foudy’s daughter started high school in 2021. Likewise, Declan was in 7th grade as of August 2021. So, Izzy has a few years until she leaves for college. Their mom shared lovely pictures of them during the first day of their respective classes.

As Isabel and Declan’s mother has a job requiring her to travel to several places, she mostly misses their first days. So, in August 2022, she shared throwback pictures of some past 1st days.

However, it is not known which school the Sawyers siblings are attending. But they must be enjoying every bit of it. Let’s hope Ian Sawyer’s children make him and his wife proud.

Isabel and her brother are born into a sports family. As already stated, their mom is a retired soccer player who works as a color commentator. Likewise, the Sayers bunch’s father is also a former soccer player and manager. So, many might be wondering if Julie Foudy and Ian Sawyers’ children are also into sports.

Well, Isabel and her brother often watch several matches with their parents. As a result, they attend several games and must be interested in soccer. In addition, in February 2021, Isabel Ann Sawyers’ mom shared a picture of her with her first soccer team, Blue Lighting. Julie also added that Izzy was still going strong.

So, could it be Isabel is also playing soccer now? Likewise, the family also goes skiing time and again. Furthermore, looking at her mom’s IG posts, it seems like Isabel enjoys surfing. Similarly, Declan is also into surfing. It appears like Julia and Ian’s athletic genes have been inherited by their children.

It might be too soon to learn about their career choice. But whatever the Sawyers kids want to pursue, their parents will support them wholeheartedly.

The Family Of Four Often Hikes Together

Besides sports, hiking is another thing the Sawyers family enjoys together. They often go on hikes to several places. Even when the family went to Switzerland, they walked through various hiking trails. Declan and Isabel’s mama often shares lovely pictures of their trips.

All in all, Julie Foudy’s children seem to be doing well. They also travel to different countries and must be living the best life. Let’s hope in any profession they plan on pursuing, they make their parents proud. Hopefully, we will learn more about Isabel Ann and Declan in the coming days. We wish them blissful days ahead.

Isabel is of Spanish origin, meaning “pledged to God.” Likewise, its other meanings are “God is perfection” and “God is my oath.” Ann, which is also spelled Anne, is a form of the Latin female given name Anna. It represents the Hebrew name Hannah meaning “favor or grace.”

The name Declan originated from Ireland, meaning “full of goodness” or “man of prayer.”