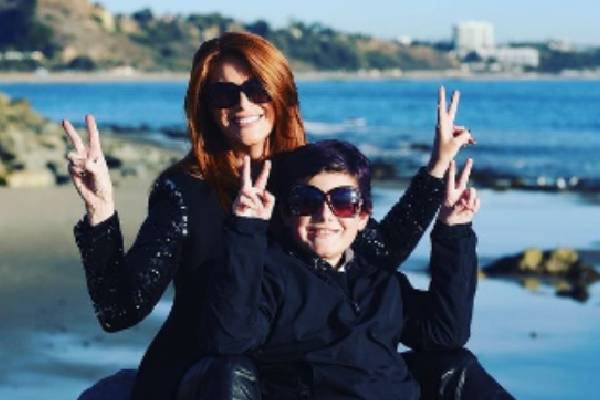 Born as Angela Kay Everhart, Angie Everhart is an accomplished actress who led an impressive career, primarily on the big screen. During the 1990s, she also appeared in several Sports Illustrated Swimsuit Issues, published annually by the American magazine Sports Illustrated.

The model with the red hair, Angie Everhart’s personal life, is not as successful as her career. She got married to Ashley Hamilton and Carl Ferro but later got divorced. All of them have moved in their life and American actor Ashley Hamilton has a gorgeous daughter, Willow Rae Hamilton, with his sweetheart, Renee Karalian.

Kayden Bobby Everhart Is The First Child Of Angie Everhart

The American actress and former model Angie Everhart is a doting mother of her only child, Kayden Bobby Everhart. She welcomed her son on July 24, 2009, at 11:28 p.m. with her ex-lover, Chad Stansbury. The actress’s representative confirmed through a statement that both mother and son were healthy.

The supermodel Angie had announced her pregnancy in February 2009. She had also shared that she would be raising her baby as a single parent to show herself as a strong, healthy, and good-spirited woman. Throughout her pregnancy, Everhart had not revealed the paternity of her child’s father. She only shared that her child’s father was nice and excited about the arrival of Kayden. However, it was later confirmed that Angie Everhart’s former-boyfriend, Chad was the father of her only son.

The celebrated actress and former swimsuit model was diagnosed with thyroid cancer on May 14. 2013. During the time of cancer surgery, Angie Everhart’s son, Kayden was just a little boy. The actress was afraid that she would not be able to see her son growing up. However, she survived the grueling treatment and is now raising her son with proper love and care.

After the successful diagnosis and treatment of thyroid cancer, Angie Everhart had to file for bankruptcy. Her medical bills for the treatments forced her to take the harsh decision. However, after recovery, the talented former model was confident about being financially stable.

The well-known model opened up about her surgery for thyroid cancer so that people will be conscious and encouraged to learn about cancer prevention, its signs, and treatment as soon as possible.

As we discussed earlier, the model is raising her baby as a single parent. She often posts her pictures with her son on her Instagram. Looking at those photos, it seems like Angie Everhart’s baby boy, Kayden Bobby Everhart enjoys traveling to various places with his loving mother. Besides traveling, Angie Everhart also takes her son to concerts and enjoys boating during holidays.

Angie Everhart is a famous figure in the American Entertainment industry. Although she is familiar with the media limelight, she rarely brings her son in front of the camera.

Nevertheless, Angie Everhart is raising her prince, Kayden Bobby Everhart, so well. Though Kayden’s mother hesitates to show him off before the media, she is probably doing her best to give him a great childhood.

Besides staying with his mother, Kayden Bobby Everhart is in touch with his father, Chad Stansbury. The father-son duo must be spending quality time with each other and let’s hope we get to see more from the unique family in the coming days.