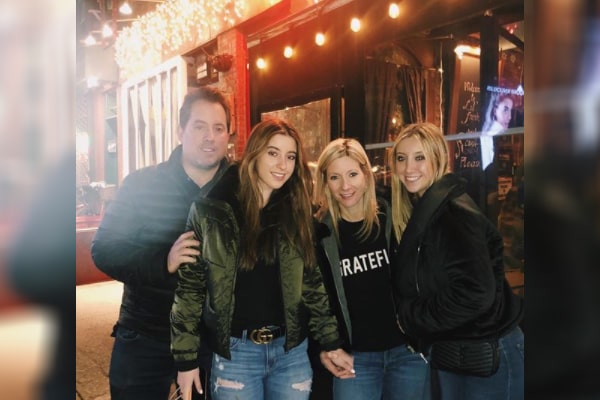 Born Kenneth Gary Albert, Kenny is a known face in sports televisions. Kenny, the son of a sportscaster, Marv Albert, is the only sportscaster in the history who does the play-by-play for all four professional sports leagues, i.e., NFL, NBA, MLB, and NHL in the U.S. and Canada.

Besides being remarkable in sports, Kenny Albert is also a doting father of two beautiful children. He was blessed with two baby girls and a partner for two decades, Barbara Wolf. Therefore, we will be talking about Kenny Albert’s daughters Sydney Albert and Amanda Albert.

It’s always a blessing to share a family with a best friend. Not many are lucky to have a fortunate family, but sportscaster Kenny Albert has managed to grab his luck in his personal life too.

Kenny met the love of his life, Barbara Wolf, in their mid-20s via his close friend and sports reporter, Jerry Coleman. The couple started dating soon after and married after two years of falling in love. Mr. and Mrs. Albert shared their vows in 1996 at the Livingston Country Club accompanied by Cantor Jacob Yaron’s enticing performance.

Regarded as the only sportscaster who does the play-by-play for all four major sports leagues in the United States, he is understandably busy. Despite hectic work schedules, Kenny Albert’s wife showed unconditional love and welcomed two beautiful daughters, Amanda Albert, on October 5, 1999, and Sydney Albert on January 27, 2003.

Sadly, Kenny Albert’s daughters are far more secretive than their father. However, Kenny does not shy away from sharing his love and best wishes via social media. At the same time, his daughters have significant numbers of followers and a private account. Despite that, we managed to find some details about Albert’s daughters. Therefore, stick until the end.

Aforementioned, Kenny Albert’s baby girls are secretive since they have private accounts. However, his eldest born, Amanda Albert, likes to put forth her career advances and experiences to the world. According to Amanda’s LinkedIn, she is currently serving as a Digital media Intern at Syracuse University.

Furthermore, Albert’s baby girl, Amanda, also worked as a sales associate for Continental Accessory Corp. for two months in 2020. Similarly, she was associated with MSG Network Inc. as a student association and served as a public relations intern for New York Red Bulls in 2018.

The 20-year-old Amanda is currently pursuing a major in broadcast and digital journalism and sport management minor at Syracuse University.

The Northern Valley Regional High School graduate, Amanda Albert, is working hard to make her life joyful and outshine her father in the coming days.

The Youngest In The Albert’s Household

Marv Albert’s son, Kenny, nurtured his daughters as great athletes and career-oriented. Although Kenny and Barbara Albert’s youngest daughter, Sydney Albert, is private on social media, she seems to have a great interest in Lawn Tennis.

Furthermore, along with her mother, Barbara, and sister, Amanda, Sydney accompanies her father during the games and shows him their support. Regrettably, there is very little about Albert’s youngest baby, but she sure is daddy’s girl and makes him proud in every way.

Amanda and Sydney’s father, Kenny, actively announces his love for them and never misses their birthdays. The family of four is very close to one another, and their bond only seems to get stronger. Moreover, the sibling-bond between Amanda and Sydney is unearthly.

Let’s hope Kenny Albert’s daughters outshine their father and grandfather as they grow through their chosen careers.

The name Amanda means worthy of love and has a Latin origin. Similarly, Sydney is of French origin, which implies Contraction Of St. Denys.