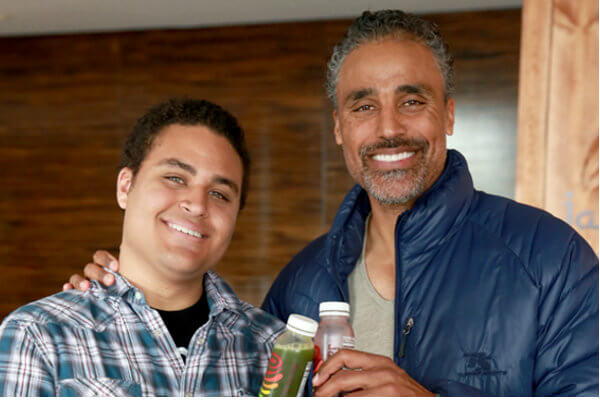 Kyle Fox is Rick Fox‘s son, born in 1993. He came into this world from Rick Fox’s ex-girlfriend, Kari Hillsman‘s womb. The ex-couple dated for a while back in 1991, and their relationship lasted one year until 1992. The former basketball star, Rick has another child with his ex-wife Vanessa L. Williams, a daughter named Sasha Gabriella Fox.

The father-son duo of Rick and Kyle, bond well and maintain good relations. Kyle is a video game developer and commentator on eSports gaming events. He lives in the US and makes a living on his own. Whether he is dating anybody or is possibly single is still in the dark.

Everybody knows that Kyle’ father Rick is a former real-life gamer, famous for playing in the NBA teams Boston Celtics and Los Angeles Lakers. Kyle too pursues a career path similar to his dad, but it’s in digital gaming rather than the real thing. Kyle streams live on Twitch and going by his Twitter, he is a Community Manager for Echo Fox, an esports team.

Similarly, Kyle Fox might be possibly single and not dating anybody at the moment. But, his cat Bronn is always there for him when he gets home from the office. The human-pet duo of Kyle and Bronn live a comfortable life together.

It might be said that the video games that Kyle Fox’s game designs reach more people than his father’s basketball matches did. In the age of technology, information travels fast, and Kyle’s work as a gaming professional will reach many teenage as well as adult gamers worldwide.

Growing up, Kyle loved to play popular Nintendo games and aspired to make games of his own since his childhood days. To help his son fulfill his dream, Rick took his son to the offices of Riot Games, the company behind League of Legends, for a job interview. Kyle was very thrilled at the prospect of having Riot as his employer. Undoubtedly, Kyle thanked his dad and gave his a warm hug for supporting him in his professional career.

When Kyle was a little kid, his dad Rick was spending his valuable time being invested in his basketball team and taking up acting roles during the off-season. However, Rick did not realize that he left his only son alone and did not spend as much time with his. It caused Kyle Fox’s relationship with his dad to become a bit strained.

Since then, Rick has taken up his son’s professional aspirations upon himself. He bought electronic sports aka eSports team of his own. Further, Rick believes that “video games help heal a lot of parent-child relationships.” When Kyle was a little boy, his father and him emotionally connected online by playing games like World of Warcraft.

Being raised by his mother Kari alone, Rick was an absent father through much of Kyle’s early life. Now a proud dad, Rick has grown out of playing basketball. These days, he focuses on guiding his esports team to victory.

As of now, it seems that daddy Rick and son Kyle have now reunited. The duo’s common goal is that of earning success in the video game industry. May God bless them, and help the father-son duo in their endeavor.

The name Kyle is a Scottish origin, meaning “narrow and straight channel.”