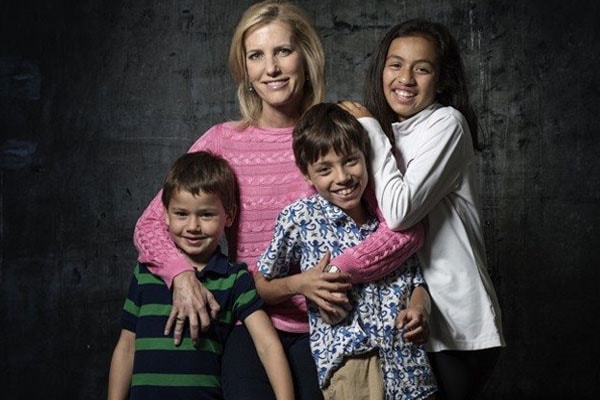 The conservative Fox News host, Laura Ingraham is a devoted and loving mother of three children. All three of her kids were adopted. Their names are – Maria Caroline Ingraham, Michael Dmitri Ingraham, and Nikolai Peter Ingraham.

Moreover, the journalist is a familiar name to any American political enthusiast. Laura is the host of The Laura Ingraham Show, editor-in-chief of LifeZette, and also an author of numerous books including The Obama Diaries. Mother Ingraham makes sure not to give her kids much public disclosure. Therefore, she rarely posts their pictures or details on her social media platforms.

Maria Caroline was adopted by Laura from an orphanage in Guatemala in the year 2008. After the adoption, Laura changed Maria’s name to Maria Caroline Ingraham. Maria was only three years old when she was adopted. Later, Laura said in her talk show that adopting Maria had been the best thing she had ever done in her life.

Laura Ingraham expressed in an interview once that spending time with her friend’s kids had awakened, in her, a sense of motherhood. Furthermore, she added that she wanted to be a mother to kids who didn’t have anyone to call their own. After bringing Maria home, Laura had her tutored English while she simultaneously learned Spanish as well. Maria is already 14 years now!

Laura adopted son Michael Dmitri in July 2009 from Moscow, Russia. At the time of adoption, Michael was only 13 months old.

In 2014, Laura had uploaded a picture of her and son Michael in a New York Mets baseball game.

As of present, Michael is 11 years old. From his age, we assume he goes to a school at his current place of residence.

Laura Ingraham’s third son is Nikolai Peter Ingraham. She adopted him in June 2011 from Russia as well, two years after Michael’s adoption.

Laura’s children might just be kids but when it comes to surprising their mother, they don’t let their ages be any barrier. For instance, on Laura Ingraham’s 54th birthday, the kids amazed her with a blue birthday cake!

No, the kids didn’t go for the fire hazard cake! pic.twitter.com/llmLcM1k5Z

Afterward, the ecstatic mother had taken to Twitter to share among followers her children’s surprise for her.

Given that Laura is a political figure, we realize it comes at a cost of seldom heated discord on public affairs, endangering the safety of her own including her children. Thus, it is only understandable that she chose her children to live a private life. Moreover, The Ingraham Angle host has truly been an inspiration for adoptive parents all over. We wish her and the little Ingraham’s a wonderful life ahead.

Maria Ingraham: From the Latin Mary, Maria means “wished-for child,” and “mistress or lady of the sea.”

Michael Ingraham: Derived from Hebrew, the name Michael means “who is like God?”

Nikolai Ingraham: Originating from the East Slavic, Nikolai means “victory of the people.”

For latest updates on Celebrity Babies and Entertainment, follow eCelebrityMirror.