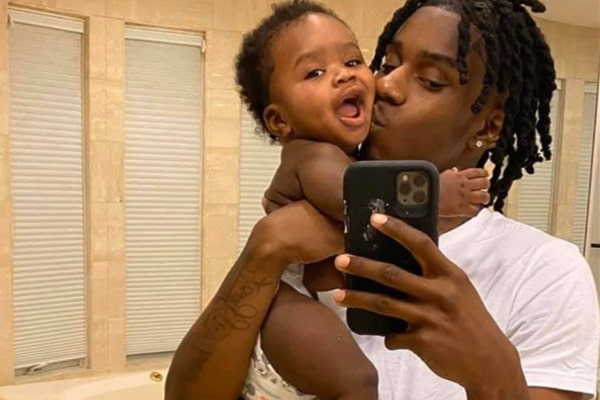 Polo G, also known as Polo Capalot or Capalot, is a Chicago rapper. He rose to fame with his tracks called Finer Things, Gang With Me, Welcome Back, etc.

G’s debut album Die a Legend was certified Gold by the Recording Industry Association of America. Similarly, his second album, The Goat, reached number 2 on the Us Billboard 2020. Hence, Polo G is enjoying a successful career in a short time. Along with being a rapper, Polo G is an amazing father to a son. Therefore, let’s have a look into Polo G’s children and how many kids he has fathered.

The 21-year-old is new to fatherhood. However, Polo G is a kickass father. He welcomed his son, Tremani, in July 6, 2019 with his girlfriend, Crystal Blease.

The couple started dating since 2018, and by 2019, Polo was eagerly waiting on his son’s arrival. He first posted about the pregnancy in May 2019. Although there are rumors of them being engaged as Polo G’s baby mama wears a ring, it is not confirmed yet.

Despite being new to being a father, Polo G bonded with his son pretty well. He seems to know what he wants his son to do. In an interview with Arts & Raps, Polo G revealed that his son is allowed to pursue his dream. Furthermore, he also told that Tremani kicks when he plays music and thus would probably hop into the music industry.

Polo G’s son made his appearances during Instagram Lives and all. He posts a lot of pictures of Tremani on Facebook but is lowkey on Instagram. However, the goofy father-son relationships were all evident via their live sessions.

Polo G Is Living His Dream

Polo G’s son’s mother, Crystal Blease, is into the makeup industry. She has her makeup line called beautyybratitude. The couple first met on Facebook and then hit it off on real life.

As of now, they are together for two years, have a baby together, and Polo G is enjoying a remarkably successful career. Also, Polo G’s girlfriend started her own YouTube channel, where she has talked about her pregnancy and many more. Furthermore in a video, she talks about wanting to have more children.

Polo G’s baby mama said that she wants a daughter, and they have already had a name for her. Having a child at the age of 21 and 19 could be some real eye-opener and teach both Polo and Crystal about life.

How Many Kids Has Polo G Fathered?

Let’s face it, Polo G is young and probably the one who is out of the relationship drama and controversies. He has got one son and is enjoying fatherhood to the fullest.

Therefore, he is having fun with his son, Tremani, and girlfriend, Crystal Blease. As mentioned above, Polo G’s girlfriend wants a sister to their son. Thus, we may hear some good news real soon.