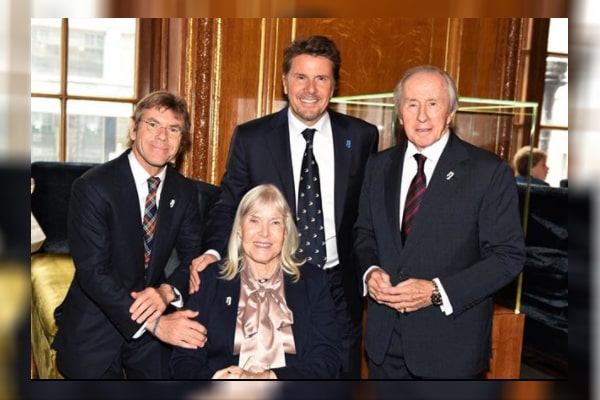 Jackie Stewart is the former British Formula One racing driver from Scotland. He competed in F1 between 1964 and 1973, winning three World Drivers’ Championships. Furthermore, nicknamed the ‘Flying Scot’ he finished as runner-up twice over the nine seasons.

Regarded as one of the most remarkable drivers in the history of the sport, Jackie is the last surviving Formula One World Champion from the 60s. He retired in 1973 and went on to live with his wife and two sons. Here, we will be talking about Jackie Stewart’s youngest son, Mark Stewart with wife, Helen Stewart.

Therefore, the adorable pair decided to wait a couple of years before welcoming their babies. Their decision was mostly because of their financial status as in an interview, Jackie told that they expected to get a few quid in the bank.

After a few years of waiting and saving, in 1965, Mark Stewart’s brother, Paul Stewart, was born. After another three years, he was born. Paul and Mark share a great bond.

The race was always a part of Mark’s childhood. While talking to The Sunday Times, Stewart’s son revealed that the most exciting things for him and his brother were traveling and bouncing on the fancy hotel beds. Oblivious as a child, the sibling duo did not understand the sad part of the race.

As Jackie Stewart’s son grew old, he understood the dark side of the racing and how much it affected his parents. Although Mark altered from following his father’s footsteps, his brother, Paul, is continuing his legacy.

Mark plainly distinguished the glamour part of the sport as he got to meet four US presidents – Gerald Ford, Jimmy Carter, George Herbert Walker Bush, and Bill Clinton. Furthermore, an English musician, George Harrison, became Uncle George to him and his brother, Paul. However, he witnessed the reality of motor racing via his father’s eyes. Hence, he chose film production and is doing a phenomenal job at it.

According to Stewart’s IMDb, he has eleven credits as a producer in movies like Faberge: A Life of Its Own, Graham Hill: Driven, Formula 1’s 60th Anniversary: Plus Ça Change, Armstrong, etc.

Let’s hope to see more of Mark Stewart’s work in the coming days.

Jackie Stewart’s son, Mark, was diagnosed with dyslexia when he was a kid. In an interview, he talked about having severe dyslexia and was struggling at school. Thus, Jackie took him to have all these tests and found out he had dyslexia.

He also talked about how bullying happens and how people make you feel stupid, calling an ‘idiot.’ Well, that’s demeaning. Mark was strong enough to take it all and improve in the coming days remarkably.

It turns out, Jackie also had dyslexia. He’d had the same problems in his school as well and took the test only to find out that he had dyslexia too. To lighten the air, Mark joked about being relieved of not being diagnosed as an ‘idiot.’ Fair enough!

The legendary racer, Jackie Stewart, married his childhood sweetheart in 1962 and welcomed two incredibly talented sons. The pair are still together after almost six decades of marriage. However, Stewart’s wife was diagnosed with frontotemporal dementia in 2016 at Mayo Clinic.

The pair worked together as a team, and Jackie confessed that one of the things that made him fall for his wife was her sharp brain. He further boasted about her being one of the best time-keepers and lap charters in the world.

It’s saddening how a person’s life changes, and Mark Stewart’s father undoubtedly dealt with a lot over time. In an interview, Mark said that his mother kept the Stewart family together. But when she was diagnosed with the disease, it was the lowest period for the family.

However, she is doing well, and three men are taking care of one woman’s job. Furthermore, Jackie himself is a dementia advocate and founded a charity, Race Against Dementia, to promote research into finding treatment for dementia. Well, everything happens for good, and let’s hope for the best for Stewart’s family as well.

Jackie Stewart’s son, Mark, has grown up to build his beautiful family of seven. He is a private person and has kept his wife a secret but has welcomed and raised five kids; four sons and a daughter with her.

Although Stewart’s wife is in shadow, his kids are free birds. Mark Stewart’s only daughter, Leona Stewart, graduated from  NYU Tisch. Likewise, amongst his sons, Marcus Stewart seems to be the eldest, followed by Andreas Stewart, Johan Stewart, and um.. a son. Mark’s youngest son is yet to make his debut on social media so, come back after a few years for an update. Sound good? Good.

Well, Mark Stewart had terrific parents and fantastic childhood. Hence, he built his own family more robust and better. Let’s hope Mark grows happier with the passing time and makes blockbuster movies in the coming years.

Mark is a Latin name which means consecrated to the god Mars”, and also may mean “God of war” or “to be warlike.”